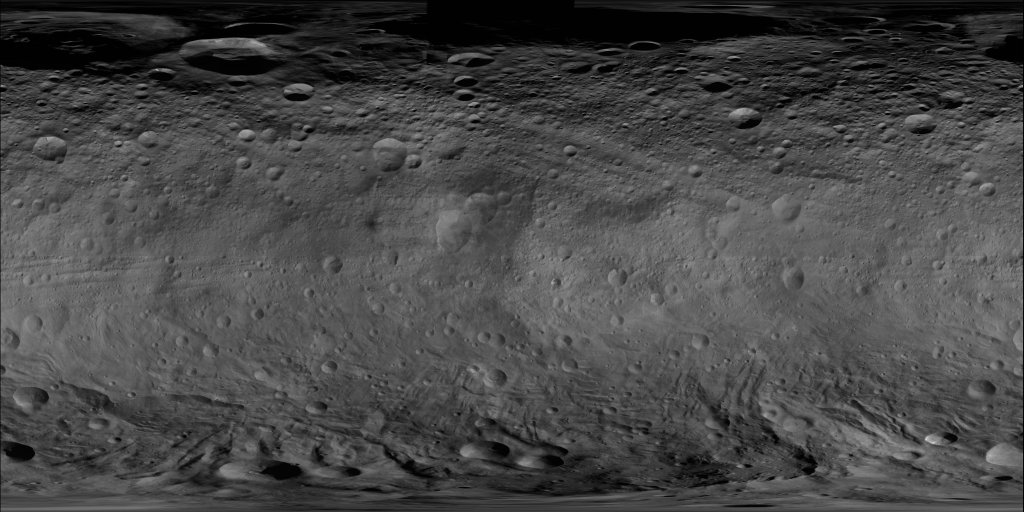 DAWN orbited Vesta during HAMO in 21 cycles between December 2011 and end of April 2012 and in 6 cycles between end of September end early November 2011. The FC took about 2,500 clear filter images with a resolution of about 60 meters per pixel (m) during these cycles. The images were taken with different viewing angles and different illumination conditions. Pixel resolution is 60 meters per pixel (m).

We selected images from one cycle (cycle 3) for the mosaicking process to have similar viewing and illumination conditions. Cycle 3 with 518 images was selected since it was the first cycle with almost complete global coverage. Very minor gaps in the coverage were filled with a few images from cycle 2 (Roatsch et al., 2012).

Note: This preliminary file has been shifted 150 degrees eastward (such that Claudia crater is located at 146E) to match the IAU-approved Claudia Double Prime system (from the Dawn-Claudia system as released by DLR in November 2013).

The Dawn spacecraft launched on September 25, 2007 onboard a Delta II-Heavy Rocket. The instrument payload consisted of two identical framing cameras (FC1 & FC2), a visible and infrared mapping spectrometer (VIR, and a gamma ray and neutron detector (GRaND). DAWN is a National Aeronautics and Space Administration (NASA) Discovery Program mission managed by the Jet Propulsion Laboratory (JPL) with the principal investigator and science operations center located at the University of California, Los Angeles. The framing cameras were built by the Max Planck Institute for Solar System Research with significant contributions by the German Aerospace Center, Institute of Planetary Research (DLR) and in coordination with the Institute of Computer and Communication Network Engineering (Polansky et al., 2016).

The NASA Dawn spacecraft entered orbit of the inner main belt asteroid 4 Vesta on July 16, 2011, and spent about one year in orbit to characterize the geology, elemental and mineralogical composition, topography, shape, and internal structure of Vesta. One of the major goals of the mission was a global mapping of Vesta. The DAWN mission was mapping Vesta from three different orbit heights during Survey orbit (3100 km altitude), HAMO (High Altitude Mapping Orbit, 700 km altitude), and LAMO (Low Altitude Mapping Orbit, 210 km altitude).

The framing camera took about 2, 500 clear filter images with a resolution of about 70 meter per pixel during the various cycles.

The first step of the processing chain is to ortho rectify the images to the proper scale and map projection type. This process requires detailed high-resolution information of the local topography of Vesta. The global topgraphy was calculated during the stereo processing of the HAMO images and was used here. The shape model was used for the calculation of the ray intersection points while the map projection itself was done onto a sphere with a mean radius of 255 km. The next step was the mosaicing of all images to one global mosaic of Vesta, the so called basemap.

Note: This preliminary file has been shifted 150 degrees eastward (such that Claudia crater is located at 146E) to match the IAU-approved Claudia Double Prime system (from the Dawn-Claudia system as released by DLR in November 2013). At the original edge when wrapped a nodata line was pushed into the mosaic. This was covered using a couple neighboring pixels for artistic purposes only.