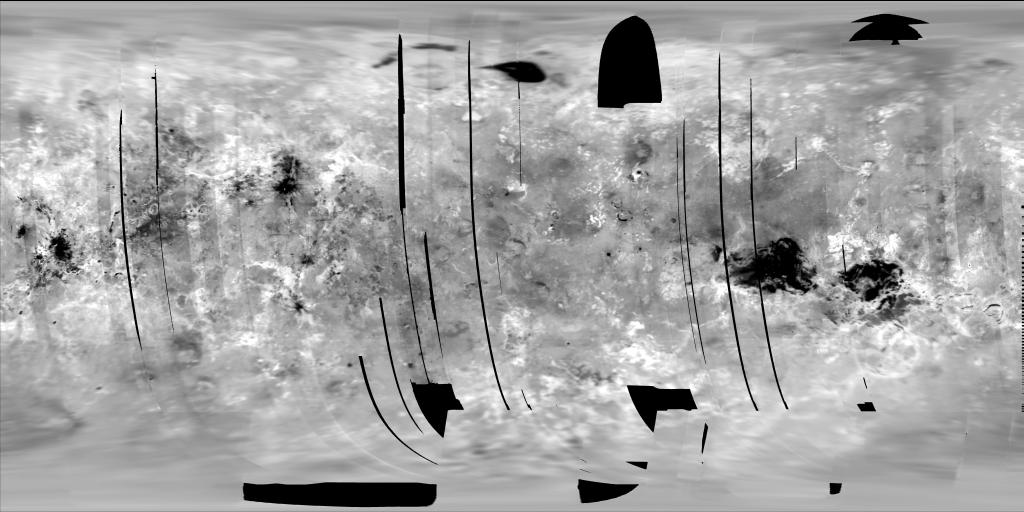 This Global Emissivity Data Record (GEDR) includes all Magellan measurements in which the high-gain antenna followed the nominal look-angle profile, in which the observed emission angle varied from 48 degrees off the local vertical at periapsis (ca. 10N latitude) to 15 degrees off vertical at the 90N and 70S. To make the GEDR images, Magellan radiometer data, in the form of readings of antenna noise temperature, are corrected for antenna sidelobe effects and for emission and absorption by the Venus atmosphere. The component reflected from the surface is modeled as a specular reflection with power reflection coefficient equal to (1 - emissivity). The location and planetary radius at the antenna boresight intercept point are derived from GTDR images and the physical surface temperature is calculated using the adiabatic model of Kliore et al., 1985. The data are then filtered to remove low-frequency instrument calibration errors, and re-sampled at a resolution of about 5x5 kilometers per pixel.

Global Emissivity Data Record (GEDR). The emissivity of a surface is defined as the thermal power emitted by that surface divided by the power emitted by a black body of the same size and at the same physical temperature. The polarization direction is horizontal (E-field tangential to surface), and the emissivity is not corrected for emission angle or surface roughness or tilt.

Each GEDR image pixel is represented by a 16-bit integer. Pixels lying outside the domain of the projection are set to NoData (0). In all images, pixels with unknown or unmeasured values are also set to NoData. The remaining values are related to the emissivity by the following equation: DN = (EMISSIVITY * 10000) + 1

Product Information: The represents the version 2 (1997 release) of…