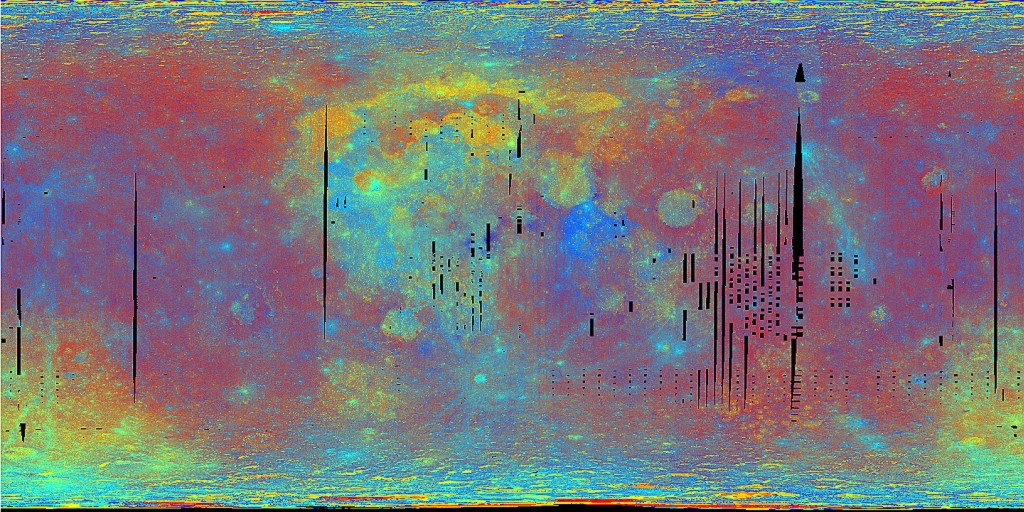 This base represents the Clementine Ultraviolet/Visible (UVVIS) warped color-ratio mineral map. This was generated from the UVVIS mosaics using three spectral filters (415, 750, and 1000 nm) and which were previously warped (spatially adjusted) to the ULCN2005 control network. The mosaic is a composite in which the ratio of the 750/415nm bands is used for the red-channel brightness, 415/750nm for the blue channel, and the 750/1000nm ratio controls the green channel. Resolution of this mosaic is 200 meters per pixel (m).

The red channel represents areas that are low in titanium, or high in glass content, the green channel is sensitive to the amount of iron in the surface, and the blue channel reflects the surfaces with high titanium or bright slopes and albedos that are not compensated by using the image ratios. Lunar highlands appear red because they have accumulated glassy agglutinates produced during the bombardment of micrometeorites (maturation). Also red in the false-color image are pyroclastic deposits because of their naturally high-glass content. The yellow-green area in the mare is the combined effect of concentration of mafic minerals (green) and the glass in the soil produced by maturation (red). The blue unit in the mare is relatively higher in titanium compared to the mare unit to its immediate north.

For more information on how the color ratio was derived, please see Lucy et al., 2000.

Color ratios serve to cancel out the dominant brightness variations in the image, generally caused by albedo variations and topographic shading. Color difference help to isolate the differences related to composition or mineralogy.

Gaps in the image are due to lack of coverage in one or more of the bands used in the color ratio.