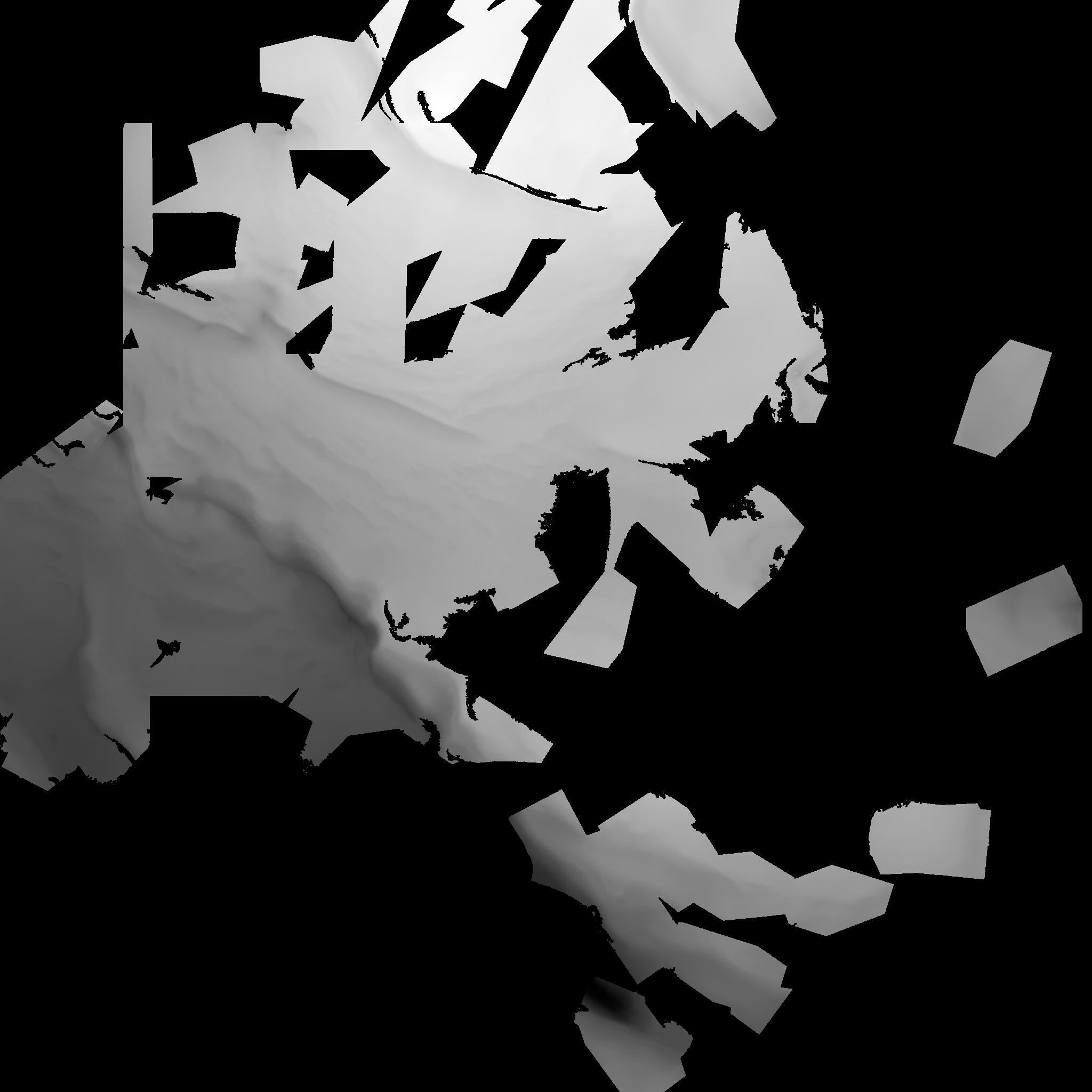 This digital terrain model (DTM) mosaic over the south polar region of Mars was generated by extracting three-dimensional point clouds from approximately 400 distinct CTX stereo image pairs and interpolating them to a regular grid at 50 meters/pixel (m) using the NASA Ames Stereo Pipeline (Beyer et al., 2018). The pixel values represent the radial distance from the center of mass of Mars to the surface (in units of meters), minus the IAU-recommended spherical datum for Mars, 3396190 meters. The DTM mosaic provides elevation values over approximately 50% of the projected area from 87° south latitude to the south pole.

This product represents a technical demonstration of the potential for processing large numbers of stereo image pairs into digital terrain models (DTMs), rigidly aligning these to a reference dataset, and joining the DTMs into a single mosaic using the NASA Ames Stereo Pipeline. It is intended to support scientific investigations by supplementing existing topographic datasets over the south polar region.

Logical Consistency Report
The CTX images in each constituent stereopair of this DTM mosaic were bundle adjusted relative to one another before proceeding with DTM extraction. The resulting DTMs were rigidly aligned to one another using an iterative closest points algorithm (3 degrees translation + 3 degrees rotation) in order to improve their three-dimensional relative alignment. These relatively-aligned DTM tiles were then rigidly aligned to the best available MOLA laser altimetry using the same iterative closest points algorithm in order to improve their absolute position in three dimensions. The product can be considered "semi-controlled" because the three-dimensional geographic location of each pixel has been constrained to an absolute geodetic reference (MOLA) using a sequence of rigid transformations, but the constituent CTX images were not tied to one another by developing a network of tie points, performing a bundle adjustment to solve for extrinsic camera parameters, and subsequently tying to MOLA as would be the case in a photogrammetrically-controlled solution.
Completeness Report

The mosaic raster contains valid elevation values at 37.85% of its pixels, including ~50% of the pixels located within the MOLA "pole gap, " poleward of 87° south latitude.

The Context Camera (CTX) on the Mars Reconnaissance Orbiter (MRO) has imaged >98% of the area from 87° S to the pole, including extensive areas of repeat coverage at multiple viewing angles. These areas of repeat coverage create the potential for topographic information to be extracted via stereo photogrammetry. Candidate stereopairs were identified from "ridealongs" with known HiRISE stereo image pairs, as well as by analyzing the relationship between viewing and illumination geometry between pairs of intersecting CTX images (Becker et al., 2015).

Not all of the extracted point clouds yielded usable DTMs due to some combination of cloud cover, excessive spacecraft "jitter, " or because the surface is characterized by smooth, featureless terrain at the scale of CTX spatial resolution. Hillshades of all of the initial DTMs were visually inspected and categorized as good (n=415), fair (n=426), or poor (n=842). Only the point clouds associated with the good DTMs were considered for alignment and mosaicking.

A version of the MOLA shot data reprocessed by the Planetary Geology, Geophysics and Geochemistry Laboratory at NASA’s Goddard Spaceflight Center, called the Ultimate MOLA Point Cloud, was selected as the absolute elevation reference data set. This version of the MOLA data corrects significant errors in shots collected poleward of 87°S when the spacecraft was pointing >10° off-nadir (Neumann et al., 2001). These corrections are not available in the MOLA PEDR products archived in the Planetary Data System (PDS).

The absolutely-aligned DTMs were blended into the final mosaic using the dem_mosaic program from Ames Stereo Pipeline. The mosaic processing used linear distance-weighted averaging to minimize residual offsets between overlapping DTMs. NoData "holes" in the mosaic up to 200 contiguous pixels were filled in using bilinear interpolation. A Gaussian blur filter with 1 sigma equal to the length of 1 pixel was applied to the final mosaic in order to smooth high-frequency noise.

See the ePoster from Mayer (2020) for a detailed description of the alignment and mosaicking procedure.

Vertical Positional Accuracy: The absolute positional accuracy of the final mosaic was assessed by computing the absolute values of vertical differences, or linear error (LE), between points from the Ultimate MOLA Point Cloud and pixels in the CTX DTM mosaic. The linear errors at the 50th and 84th percentiles were found to be 8 meters and 33 meters, respectively.