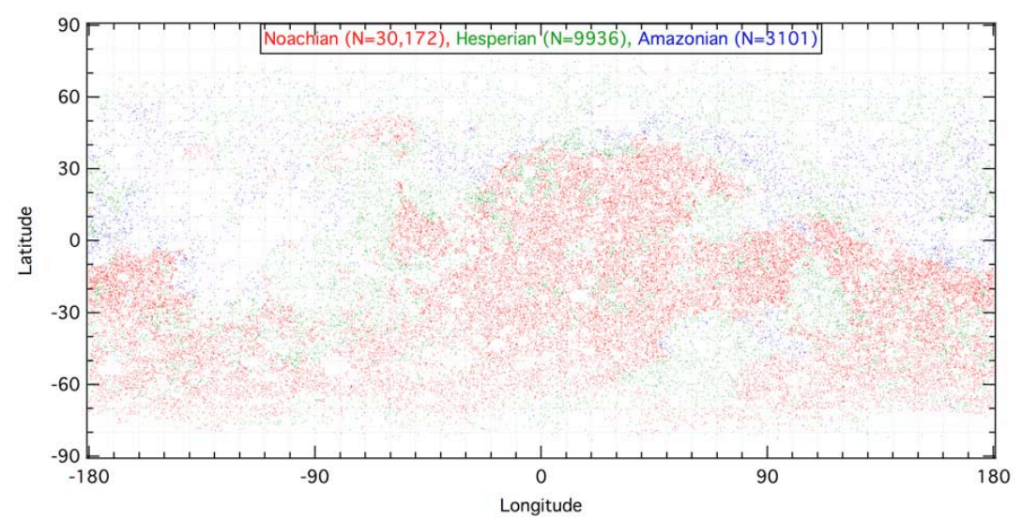 This research is a multi-stage process of identification and analysis. It involves going through global Thermal Emission Imaging System (THEMIS) daytime thermal infrared mosaics of Mars (or Viking Mars Digital Image Model (MDIM) 2.1 where THEMIS has gaps) and literally circling every crater that is resolved. I do this at ~500 m spacing between point resolution, and I limit myself to =5 points along a crater rim which limits the diameter to ~700-800 meters. I estimate my statistical completeness to be at ~1.0 km.

2001 Mars Odyssey launched on April 7, 2001, and arrived at Mars on October 24, 2001 as part of NASA's Mars Exploration Program, a long-term effort of robotic exploration of the red planet. It carries three star cameras, the Mars Radiation Environment Experiment (MARIE), which measures the near-space radiation environment as related to the radiation-related risk to human explorers, the Thermal Emission Imaging System (THEMIS), which maps the mineralogy of the martian surface using a high-resolution camera and a thermal infrared imaging spectrometer, and the Gamma-Ray Spectrometer (GRS), which maps the elemental composition of the surface and determine the abundance of hydrogen in the shallow subsurface (PDS IMG, 2018).

The part of the THEMIS imaging system that takes pictures in visible light is able to show objects about as big as a semi-truck. This resolution helps fill in the gap between large-scale geological images from the Viking orbiters in the 1970s and the very high-resolution images from the currently orbiting Mars Global Surveyor (NASA, 2019).

Mars Global Surveyor was the first successful U.S. mission launched to Mars since the Viking mission in 1976. After a 20-year absence at the planet, Mars Global Surveyor ushered in a new era of Mars exploration with its five science investigations including the Mars Orbiter Laser Altimeter (MOLA). The MOLA created the most accurate global topographic map of any planet in the solar system, giving scientists elevation maps precise to within about 30 centimeters (1 foot) in the vertical dimension (NASA JPL 2010).

The Viking Landers transmitted images of the surface, took surface samples and analyzed them for composition and signs of life, studied atmospheric composition and meteorology, and deployed seismometers. The Viking 2 Lander ended communications on April 11, 1980, and the Viking 1 Lander on November 13, 1982, after transmitting over 1400 images of the two sites (Williams, 2018).

The purpose of this catalog is that none yet exists and to use it to act as a comparison for my layered ejecta crater analysis. Nadine Barlow created the first global catalog in the 1980s from Viking data for craters =5 km, but it is somewhat incomplete, and it obviously lacks smaller craters. It contains ~42, 000 craters. My published catalog contains ~640, 000 craters, about 385, 000 of them with a diameter larger than 1.0 km. The applications of this catalog will be several-fold, though it was initially conceived to act as a "control" crater population with which to study the layered ejecta craters on Mars.

Originally this catalog included craters down to 2.5 km. Then 1.5 km. But, an analysis routine I wrote in Summer 2010 showed that in many places I was complete to about 1.25 km, especially in the southern hemisphere. In my final "pass" in searching for craters that I may have missed, I'm going to try to push this to be statistically complete to 1.0 km. Yes, this will actually double the number of craters, but the vast majority of them will be very easy to analyze because they will be simple, ~1-km-diameter craters. With the July 2010 release of new global THEMIS maps at 100 meters/pixel resolution in contrast with the older, less complete (especially in the mid-northern latitudes), 256 pixels/degree (~230 m/px at the equator) maps I was using, this should be feasible. And 1.0 is a nicer number than 1.5 or 1.25.

The bulk of crater identification and classification was done using THEMIS Daytime IR planet-wide mosaic. The version used was released on June 23, 2010, at 100 m/pix from the band centered at 12.57 um. It has roughly ~99% global coverage of usable data with the largest gaps in the high northern latitudes. The mosaics are constructed from a semi-controlled net to the MOLA basemap. This results in small offsets when compared with MOLA in some areas in the present release of a maximum of ~1 km, though there is image doubling in some areas due to the lack of a complete control net and blending.

Product Information: This research is a multi-stage process of…