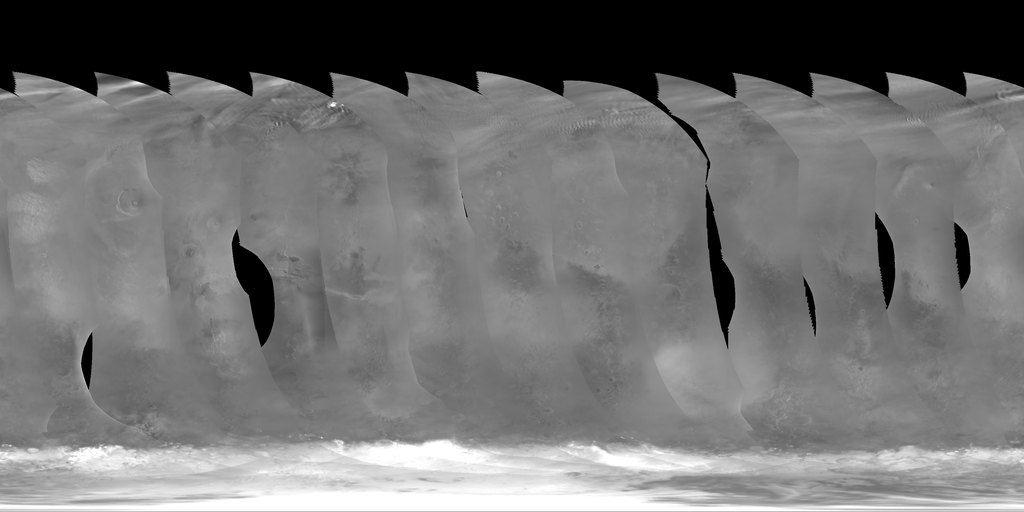 This PDS4-compliant archive contains version 2.0 Mars Reconnaissance Orbiter (MRO) Mars Color Imager (MARCI) Mars Daily Global Maps (MDGMs). Each MDGM is a daily global mosaic of Mars (90S-90N, 180W-180E) on a regular latitude / longitude grid (with 0.1 degree or 0.05 degree spatial resolution). It is composed of 13 consecutive global map swaths taken by the MRO MARCI instrument. A global map swath is a pole-to-pole, limb-to-limb wide-angle image which is gradually built up by the camera during the visible portion of the spacecraft’s 3AM-3PM 2-hourly polar orbit. Consequently, a MDGM represents Mars as seen at around 3PM on each Mars day (sol). There is 1 overlap swath between consecutive days. For example, the 13th swath for day 1 is the same as the 1st swath of day 2, and so on. Missing or unusable swaths are treated as missing data for the corresponding day.

Since a MDGM includes data taken during a period of approximately one day, it corresponds to a range of imaging time and solar longitude (L_s) values. We provide the list of MARCI filenames used to create each MDGM in the index folder for each filter. A user can use the “START_TIME” and “STOP_TIME” in the header of each MARCI image (available at the PDS) to obtain the exact time range. The MARCI filename is in the format of PPP_NNNNN_TTTT_MX_00NBBBW, where PPP is the mission subphase and TTTT is the solar longitude at the start of the image (in units of 0.1 degree). TTTT can therefore be used to represent the approximate L_s value for the MARCI image swath. A full description of MARCI filename convention can be found in the marcisis file in the MARCI PDS archive. To simplify the usage of MDGMs, we provide the Mars year and approximate L_s value for each day in the “PPP_ls.txt” file in the index/color folder. The L_s value corresponds to the middle swath used for the MDGM.

The version 2.0 MDGMs result from an upgrade from the version 1.0 MDGMs (Wang and Richardson, 2015). The procedure used for version 2.0 is described in the “processing” file in this folder. Version 2.0 includes both 0.1 degree by 0.1 degree and 0.05 degree by 0.05 degree maps for the visible filters, while version 1.0 only has 0.1 degree by 0.1 degree maps. Moreover, version 2.0 has gone through more extensive image processing to reduce artifacts in the final product. In spite of the effort, some residual artifacts inevitably remain. These are not treatable using the current processing pipeline. Further improvement will require manual correction on a case-to-case basis, which is beyond the capability of version 2.0. Known problems are listed in the “errata” file in this folder.

MARCI has 5 visible (band1: blue, band2: green, band3: orange, band4: red, band5: nir) and 2 UV (band6: short_uv, band7: long_uv) filters (Bell et al., 2009). Therefore, there are usually 7 black-and-white MDGMs for each spatial resolution (0.1 degree or 0.05 degree) on each day - one for each filter. Occasionally, a MARCI image swath only has 3 visible filters (band1, 2, and 3). In this case, the MDGM affected by the swath will have missing values (0) corresponding to the missing filters. In addition to black-and-white MDGMs on each day, a color MDGM is created for each resolution by combining 3 visible MDGMs (normally band4, band2, and band1, or occasionally band3, band2, and band1). The 0.1 degree MDGMs are in the data/ folder. The 0.05 degree MDGMs are in the data_resx2/ folder.

NASA's Mars Reconnaissance Orbiter (MRO), launched August 12, 2005, is on a search for evidence that water persisted on the surface of Mars for a long period of time. While other Mars missions have shown that water flowed across the surface in Mars' history, it remains a mystery whether water was ever around long enough to provide a habitat for life. MRO successfully arrived at Mars on March 10, 2006. The mission has shown unprecedented detail in orbital images of Mars.

The MRO MARCI MDGM dataset is meant to provide a quick-and-easy way of displaying albedo features (dust storm, condensate cloud, or surface) on Mars each day. Users are free to stretch the maps any way they desire. Please note that MDGMs are not intended to be converted to physical units for radiance related studies. For those studies, we suggest that the user perform radiometric processing on MARCI EDR images.

This collection consists of the first two Mars years of maps (the P and B subphases).

The version 2.0 MRO MARCI MDGM is generated one mission subphase at a time. The production procedure involves the following steps. (1). Download the MRO MARCI EDR images for the mission subphase from the PDS. Split each image into individual filters. Calculate image backplanes (incident angle, emission angle, phase angle, latitude, and longitude) using SPICE toolbox. (2) Apply radiometric calibration to convert Data Number (DN) to physical unit following the procedure described in the “marcical.txt” file in the MARCI PDS archive. Remove down- track “stripes” due to pixel-to-pixel variation. (3). For each filter, derive an averaged radiometrically processed image. Use the averaged image to derive parameter values for the photometric function through non-linear leastsquares fitting (see document/processing.pdf for a description of the photometric function). Perform photometric correction. I.e., each radiometrically calibrated pixel from Step (1) is divided by the value calculated using the photometric function. (4). For each filter, derive an averaged photometrically processed image swath for each resolution. All UV images have 128 samples per line. For visible images, a mission subphase usually contains two resolutions – (a) 1024 samples per line and (b) 512 samples per line. Occasionally, there are not enough images of one resolution or the other within the mission subphase to generate the averaged image. When this happens, images of the same resolution in adjacent mission subphases are combined to calculate the average. One or both bright polar cap(s) in the averaged swath are sometimes removed by extrapolating from the regolith area near the cap edge toward the pole. Divide each image swath from Step (3) by the averaged swath. This normalization is designed to further “flatten” the brightness variation due to viewing geometry. For UV swaths, semi-manually crop out the area with severe anomalies and smooth out residual along-track stripes. (5). For each pixel of the image, calculate the weight to be used to merge image swaths into MDGMs. The weight is based on the sum of the incidence angle, emission angle, and phase angle. Larger weight is assigned to smaller sum. Pixels with extreme geometry near the north and south terminator cause apparent anomaly in MDGM. Therefore, they are assigned to zero weight. (6). Organize MARCI images into different days. Each day contains data obtained within 13 consecutive MRO orbits. Make daily mosaic for each filter using the image processed through Step (4), the weight in Step (5), and the latitude and longitude backplanes calculated in Step (1). For visible bands, make both 0.1 degree and 0.05 degree MDGMs. Since the resolution of UV swath is about 8 km/pixel at nadir, we only make 0.1 degree MDGMs for band6 and band7. (7). Make RGB color MDGM by combining band4, band2 and band1 (or band3, band2 and band1 when band4 is unavailable).