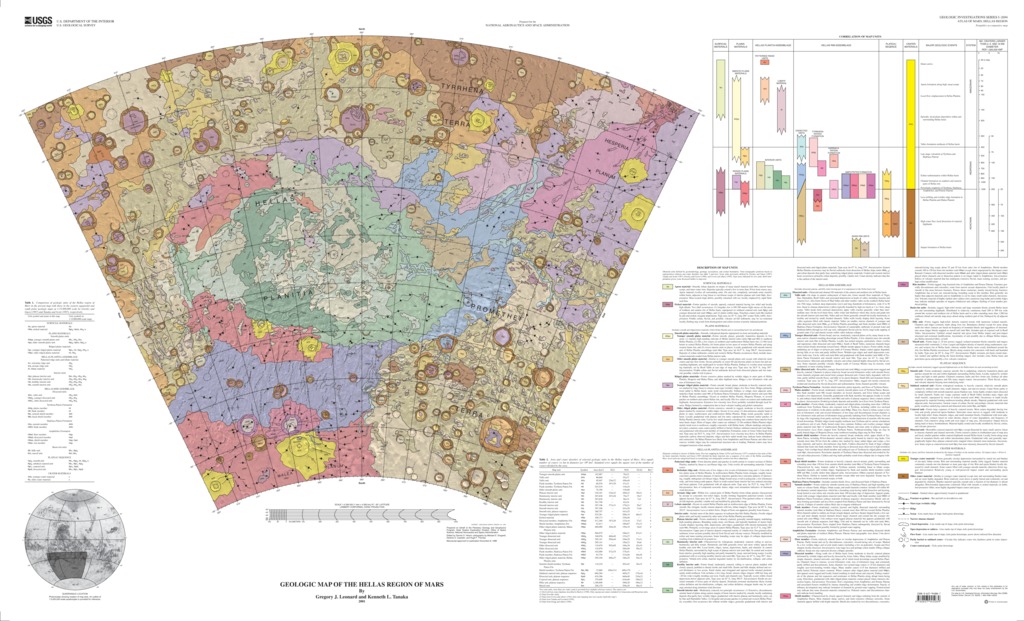 INTRODUCTION This geologic map of the Hellas region focuses on the stratigraphic, structural, and erosional histories associated with the largest well-preserved impact basin on Mars. Along with the uplifted rim and huge, partly infilled inner basin (Hellas Planitia) of the Hellas basin impact structure, the map region includes areas of ancient highland terrain, broad volcanic edifices and deposits, and extensive channels. Geologic activity recorded in the region spans all major epochs of martian chronology, from the early formation of the impact basin to ongoing resurfacing caused by eolian activity. The Hellas region, whose name refers to the classical term for Greece, has been known from telescopic observations as a prominent bright feature on the surface of Mars for more than a century (see Blunck, 1982). More recently, spacecraft imaging has greatly improved our visual perception of Mars and made possible its geologic interpretation. Here, our mapping at 1:5,000,000 scale is based on images obtained by the Viking Orbiters, which produced higher quality images than their predecessor, Mariner 9. Previous geologic maps of the region include those of the 1:5,000,000-scale global series based on Mariner 9 images (Potter, 1976; Peterson, 1977; King, 1978); the 1:15,000,000-scale global series based on Viking images (Greeley and Guest, 1987; Tanaka and Scott, 1987); and detailed 1:500,000-scale maps of Tyrrhena Patera (Gregg and others, 1998), Dao, Harmakhis, and Reull Valles (Price, 1998; Mest and Crown, in press), Hadriaca Patera (D.A. Crown and R. Greeley, map in preparation), and western Hellas Planitia (J.M. Moore and D.E. Wilhelms, map in preparation). We incorporated some of the previous work, but our map differs markedly in the identification and organization of map units. For example, we divide the Hellas assemblage of Greeley and Guest (1987) into the Hellas Planitia and Hellas rim assemblages and change the way units within these groupings are identified and mapped (table 1). The new classification scheme includes broad, geographically related categories and local, geologically and geomorphically related subgroups. Because of our mapping at larger scale, many of our map units were incorporated within larger units of the global-scale mapping (see table 1). Available Viking images of the Hellas region vary greatly in several aspects, which has complicated the task of producing a consistent photogeologic map. Best available image resolution ranges from about 30 to 300 m/pixel from place to place. Many images contain haze caused by dust clouds, and contrast and shading vary among images because of dramatic seasonal changes in surface albedo, opposing sun azimuths, and solar inclination. Enhancement of selected images on a computer-display system has greatly improved our ability to observe key geologic relations in several areas. Determination of the geologic history of the region includes reconstruction of the origin and sequence of formation, deformation, and modification of geologic units constituting (1) the impact-basin rim and surrounding highlands, (2) volcanic and channel assemblages on the northeast and south sides of the basin, (3) interior basin deposits, and (4) slope and surficial materials throughout the map area. Various surface modifications are attributed to volcanic, fluvial, eolian, mass-wasting, and possibly glacial and periglacial processes. Structures include basin faults (mostly inferred), wrinkle ridges occurring mainly in volcanic terrains and interior plains, volcanic collapse craters, and impact craters. Our interpretations in some cases rely on previous work, but in many significant cases we have offered new interpretations that we believe are more consistent with the observations documented by our mapping. Our primary intent for this mapping has been to elucidate the history of emplacement and modification of Hellas Planitia materials, which form the basis for analysis of their r

Deuteronilus Mensae, first defined as an albedo feature at lat 35.0…

Introduction Rock units were deposited on Mars by meteorite impact,…