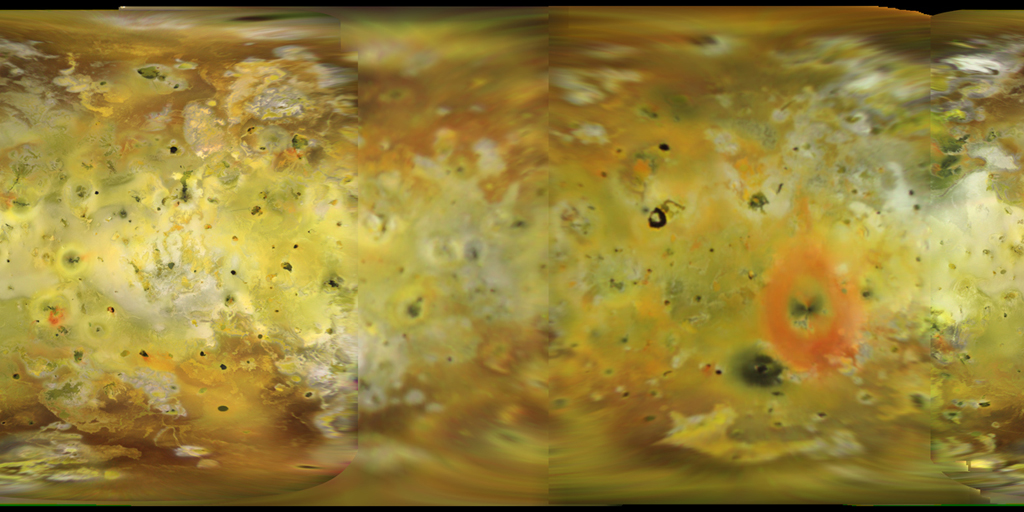 This new basemap of Jupiter’s moon Io was produced by combining the best images from both the Voyager 1 and Galileo Missions. Although the subjovian hemisphere of Io was poorly seen by Galileo, superbly detailed Voyager 1 images cover longitudes from 240˚W to 40˚W and the nearby southern latitudes. A monochrome mosaic of the highest resolution images from both Galileo and Voyager 1 was assembled that includes 29 Voyager 1 images with spatial resolutions sometimes exceeding the 1 kilometer per pixel (km) scale of the final mosaic. Because this mosaic is made up of images taken at various local times of day, care must be taken to note the solar illumination direction when deciding whether topographic features display positive or negative relief. In general, the illumination is from the west over longitudes 40 to 270 W, and from the east over longitudes 270 W to 40 W. Color information was later superimposed from Galileo low phase angle violet, green, and near-infrared (756 nanometer wavelength) images.

The Galileo Solid-State Imaging (SSI) camera’s silicon charge-coupled device (CCD) was sensitive to longer wavelengths than the vidicon cameras of Voyager, so that distinctions between red and yellow hues can be more easily discerned. The “true” colors that would be visible to the eye are similar but much more muted than shown here. Image resolutions range from 1 to 10 km along the equator, with the poorest coverage centered on longitude 50 W (Becker & Geissler, 2005; Belton et al., 1992).

Galileo's Solid-State Imaging (SSI) experiment was designed to study Jupiter and it’s satellites using multi-spectral, high-resolution, charge-coupled device (CCD) camera. The camera was operated in eight filtered band passes from 350-1100nm, the eight -position filter wheel consisted of three broad-band filters: violet(404nm), green(559nm), and red(671nm). The broad-band filters allowed for the reconstruction of visible color photographs. The use of a CCD permitted the SSI to have an image geometry which was independent of brightness gradients, greater sensitivity to incident photons, and a wider spectral range than any camera previously flown on a planetary mission.

This product updates Voyager mission global maps with Galileo SSI data of superior resolution and geometric fidelity. The color mosaic improves on the previous product of Geissler (1999) [3] using later, higher resolution images with better geometric control and a more consistent range of phase angles. These products have been used as a basis to map global geologic units [4], paterae [5], and volcanic fields [6] and as a base map for planetary nomenclature. An animated globe produced from the merged mosaic is available from NASA Planetary Photojournal (supplemental information link below).

PDS images were ingested into ISIS 2 and were calibrated using the best end-of-mission calibration information, co-registered to subpixel precision, and map projected using the camera-pointing corrections of Archinal et al. (2001). A Lunar–Lambert limb-darkening correction was next performed, after having first determined that a coefficient of 0.7 was adequate for all three colors. Finally, the images were mosaicked together using a numerical procedure that reduces the mismatch at the seams (Soderblom, L.A., Edwards, K., Eliason, E.M., Sanchez, E.M., and Charette, M.P. 1978. Global color variations on the Martian surface. Icarus 34. doi:10.1016/0019-1035(78)90037-4). 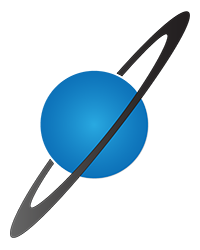