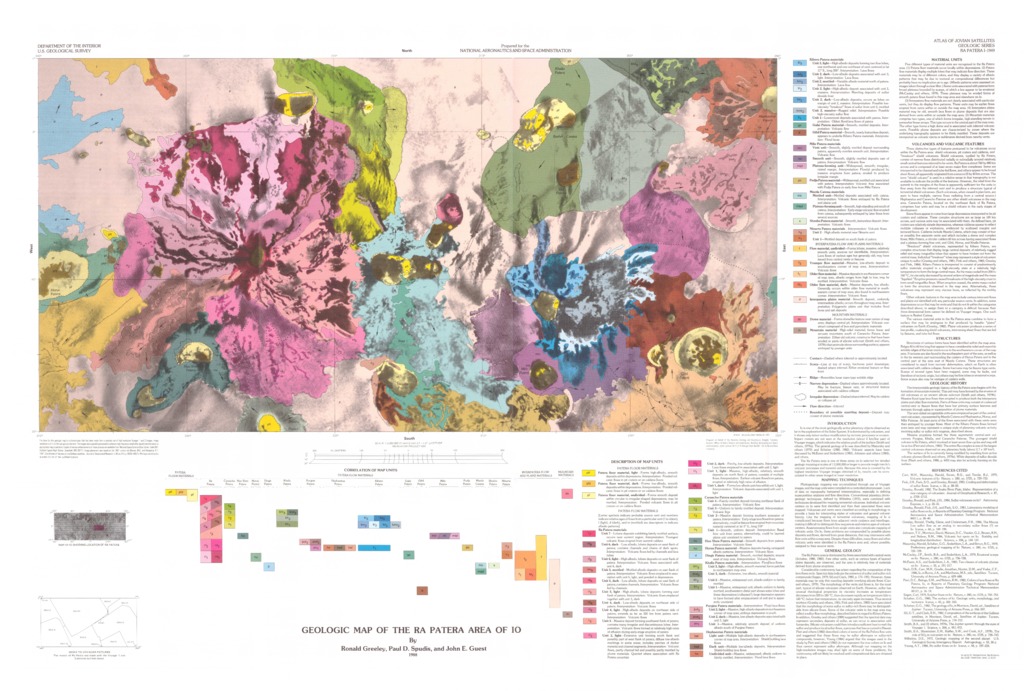 Io is one of the most geologically active planetary objects observed so far in the exploration of the Solar System. It is dominated by volcanism, and it shows only minor surface modification by tectonic processes or erosion. Impact craters are not seen at the resolution (about 2km/line pair) of Voyager images, which indicated the relative youth of the surface (Smith and others, 1979a). The general geology of Io was described by Masursky and others (1979) and Schaber (1980, 1982). Volcanic aspects have been discussed by McEwen and Soderblom (1983), Johnson and others (1984), and others. The Ra Paera area is one of three areas on Io selected for detailed geologic mapping at scales of 1:2,000,000 or larger to provide insight into Io’s volcanic processes and material units. Because this area is covered by the highest resolution Voyager images obtained of Io, results can be extrapolated to other area imaged at lower resolution.

Photogeologic mapping was accomplished through use of Voyager images, and the map units were complied on a controlled photomosaic. Lack of data on topography hampered interpretations, especially in defining superposition relations and flow directions. Conventional planetary photogeologic techniques, defined by Wilhelms (1972), were combined with techniques developed for mapping terrestrial volcanoes. Individual volcanic centers on Io were first identified and then their associated flows were mapped. Volcanoes and vents were classified according to morphology to provide a basis for interpreting styles of volcanism and general volcanic history. Like the mapping of terrestrial volcanoes, mapping of Io is complicated because flows from adjacent vents coalesce and interfinger, making it difficult to distinguish flow sequences and relative ages of volcanic centers. Anastomosing flows from single vents also complicate mapping of volcanic units. On Io, these problems are compounded by possible plume deposits and flows, derived from great distances, that may interweave with flow units within a map area. Despite these difficulties, many flows and other volcanic units were identified in the Ra Patera area and, where possible, assigned to their source vents. References: Wilhelms, D.E., 1972, Geologic mapping of the second planet: U.S. Geological Survey Interagency Report: Astrogeology, v.55, 36 p.

Io, the innermost Galilean satellite of Jupiter, is about the same…