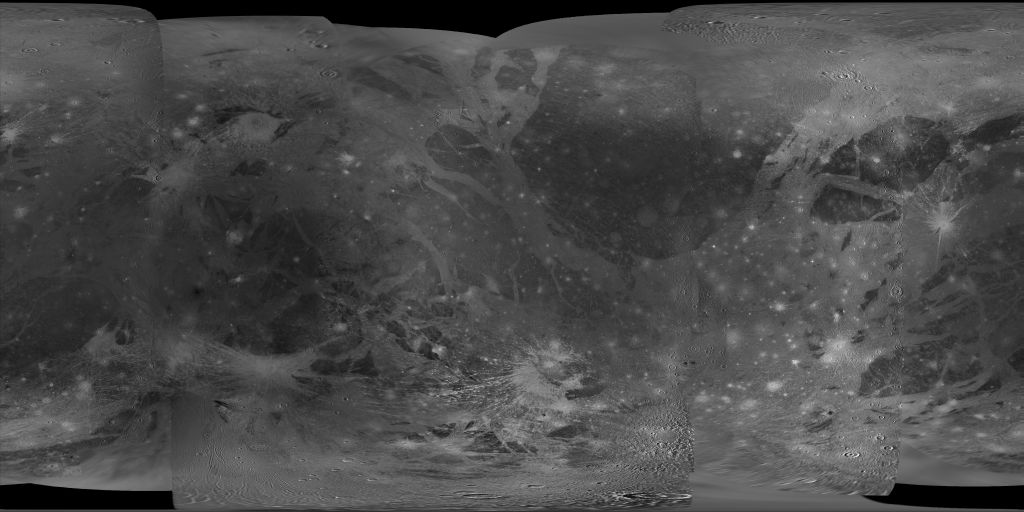 Currentness Reference
Publication date
Progress
Complete
Update Frequency
None planned
Logical Consistency Report
The geometric control network was computed at the RAND Corporation (Davies and others, 1998; Davies and Katayama, 1981); this map of Ganymede utilized RAND’s most recent solution as of November 1999. The process to determine the control network involved selecting control points on the individual images, making pixel measurements of their locations, using reseau locations to correct for geometric distortions, and converting the measurements to millimeters in the focal plane. These data are combined with the camera focal lengths and navigation solutions as input to photogrammetric triangulation software that solves for the best-fit sphere, the coordinates of the control points, the three orientation angles of the camera at each exposure (right ascension, declination, and twist), and an angle (W0) which defines the orientation of Ganymede in space. W0 - in this solution 44.064° - is the angle along the equator to the east, between the 0° meridian and the equator’s intersection with the celestial equator at the standard epoch J2000.0. This solution places the crater Anat at its defined longitude of 128° (Davies and others, 1996). References: * Davies, M.E., Colvin, T.R., Oberst, J., Zeitler, W., Schuster, P., Neukum, G., McEwen, A.S., Phillips, C.B., Thomas, P.C., Veverka, J., Belton, M.J.S., and Schubert, G., 1998, The control networks of the Galilean satellites and implications for global shape: Icarus, v. 135, p. 372–376. * Davies, M.E., and Katayama, F.Y., 1981, Coordinates of features on the Galilean satellites: Journal of Geophysical Research, v. 86, no. A10, p. 8635–8657. * Davies, M.E., Abalakin, V.K., Bursa, M., Lieske, J.H., Morando, B., Morrison, D., Seidelmann, P.K., Sinclair, A.T., Yallop, B., and Tjuflin, Y.S., 1996, Report of the IAU/IAG/COSPAR Working Group on Cartographic Coordinates and Rotational Elements of the Planets and Satellites, 1994: Celestial Mechanics and Dynamical Astronomy, v. 63, p. 127–148.
Completeness Report

This global map base uses the best image quality and moderate resolution coverage supplied by Galileo SSI and Voyager 1 and 2 (Batson, 1987; Becker and others, 2001). The monochrome and color data were both processed using Integrated Software for Imagers and Spectrometers (ISIS, version 2) (Gaddis and others, 1997). The individual images were radiometrically calibrated and photometrically normalized using a Lunar-Lambert function with empirically derived values (McEwen, 1991; Kirk and others, 2000). A linear correction based on the statistics of all overlapping areas was then applied to minimize image brightness variations. The image data were selected on the basis of overall image quality, reasonable original input resolution (from 20 km/pixel for gap fill to as much as 180 m/pixel), and availability of moderate emission/incidence angles for topography and albedo. The black and white monochrome base mosaic was constructed separately from the three-band color mosaic. Although consistency was achieved where possible, different filters were included for the monochrome global image coverage as necessary: clear for Voyager 1 and 2; clear, near-IR (757 nm), and green (559 nm) for Galileo SSI. Individual images were projected to a Sinusoidal Equal-Area projection at an image resolution of 1.0 km/pixel. The global color map was processed in Sinusoidal projection with an image resolution of 6.0 km/pixel. The color utilized the SSI filters 1-micron (991 nm) wavelength for red, SSI 559 nm for green, and SSI 413 nm for violet. Where SSI color coverage was lacking in the longitude range of 210°–250°, Voyager 2 wide-angle images were included to complete the global coverage . The chosen filters for the Voyager 2 data were about 530 nm for green, and about 480–500 nm for blue. The red band was synthesized in this area based on statistics calculated from the surrounding SSI 1-micron (991 nm) data and SSI and Voyager data in the green and blue bands. The final global color map was then scaled up to 1.0 km/pixel and merged with the monochrome base mosaic. The north pole and south pole regions that lack digital color coverage have been completed with the monochrome map coverage. The final constructed Sinusoidal projection mosaic was then reprojected to the Mercator and Polar Stereographic projections included on this sheet. The color of the final mosaic was enhanced using commercial software.