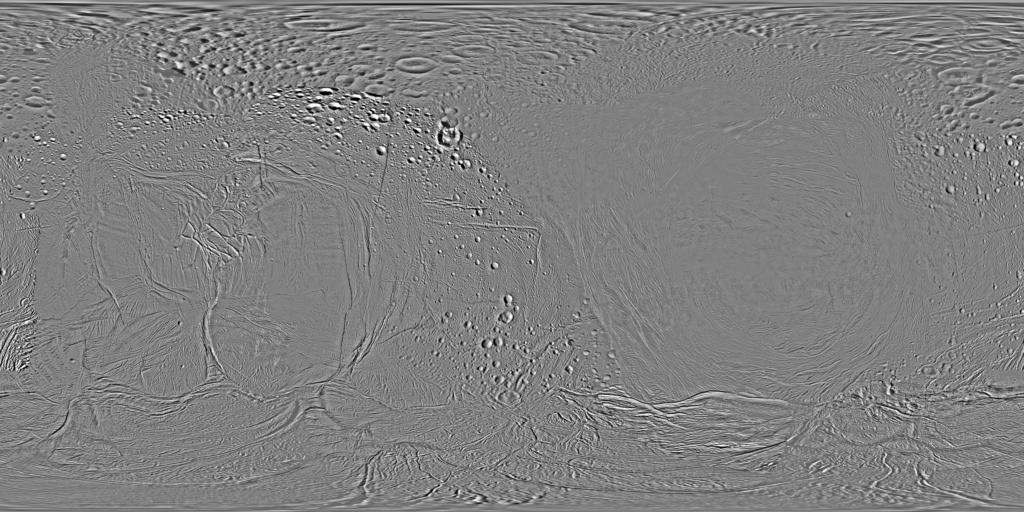 This mosaic represents the completion of a global control network of Enceladus containing Cassini Imaging Science Subsystem (ISS) images. A total of 586 images in CLR, GRN, UV3, and IR3 filters were selected for the control network. The image selection criteria were based on coverage, quality, and a spatial resolution between 50 and 500 meters per pixel (m) with phase angles less than 120 degrees.

While this collection of images was enough for global coverage of Enceladus, the coverage in some filters, specifically UV3 and IR3, were inadequate (Bland, 2018). A high pass filter (HPF) has been applied to the images in order to achieve a uniform brightness (the low frequency albedo has been removed) and then converted to an 8bit data range.

All images were map projected to the IAU mean radius (252.1 km/pixel). The map is an equidistant (simple cylindrical) projection and has a scale of 110 meters (360 feet) per pixel at the equator. The mean radius of Enceladus used for projection of this map is 252 kilometers (157 miles). Like other recent Enceladus global maps, this mosaic was shifted 3.5 degrees to the west to be consistent with the International Astronomical Union (IAU) longitude definition for Enceladus Ancillary Products (on the right), include north and south polar views of the controlled mosaic in GeoTIFF format with corresponding ISIS3 labels. The Ancillary Products also include a compressed archive containing raster backplanes of emission, incidence and phase angles, and original spatial resolution of the constituent images of the mosaic

The Cassini-Huygens mission was a joint endeavor between the Italian Space Agency, European Space Agency (ESA) and National Aeronautics and Space Administration (NASA). Cassini-Huygens launched from Cape Canaveral Air Force Base in Florida on October 15, 1997 and ended on September 15, 2017 when Cassini began its Final Entry into Saturn’s Atmosphere. The primary mission ran from July 2004 – June 2008, the first mission extension (Equinox) was from July 2008- October 2010 and was followed by a final extended mission (Solstice) from October 2010 – September 2017. During the Equinox extended mission, Cassini had seven encounters with Enceladus in October and November 2009. The imaging team consists of scientists from the US, England, France, and Germany. The imaging operations center and team lead (Dr. C. Porco) are based at the Space Science Institute in Boulder, Colorado, USA.

This effort was in support of a new global geologic map of Enceladus.

Product Information: This mosaic shows an updated global map of…