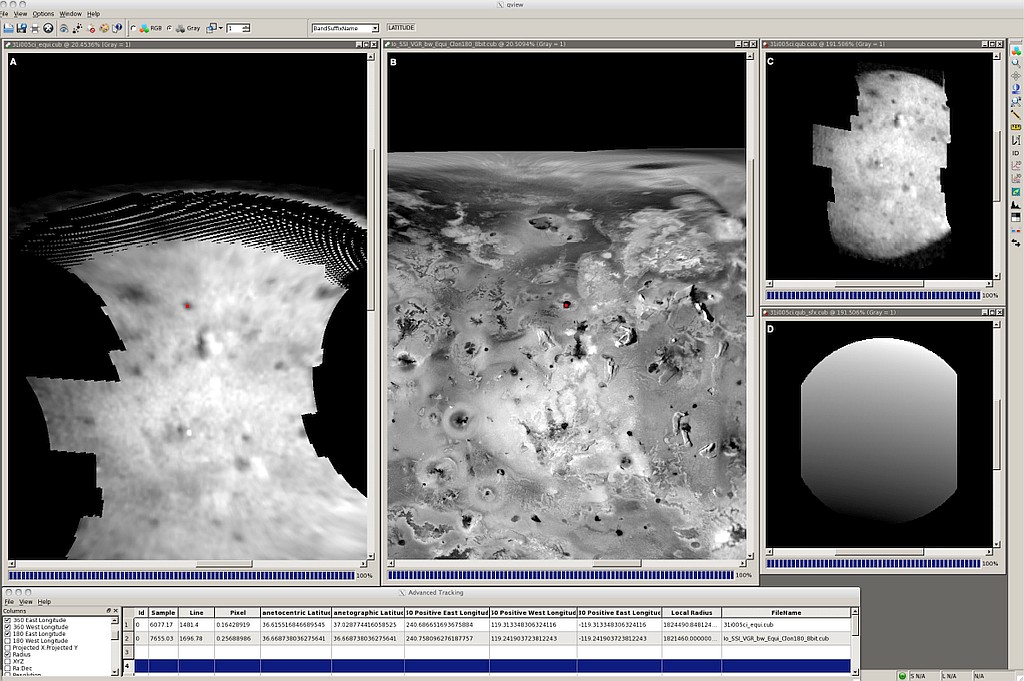 Given the renewed interest in the outer solar system by NASA, including efforts toward developing viable Europa orbital and lander missions and line items in the decadal survey calling for an Io Observer mission (Cahill et al., 2017), previous data sets of these bodies are extremely important for planning, targeting, and continued scientific analysis leading up to execution of these mission efforts in the coming years. Galileo data is a good example of a data set that could yield more information moving into the future if a greater number of the community can easily access and use it. Galileo collected monochrome and multispectral visible data with the Solid State Imager (SSI) and hyperspectral near-infrared reflectance spectra with the Near-Infrared Mapping Spectrometer (NIMS) of numerous planetary bodies including several of Jupiter’s Moon’s (e.g., Io and Europa).

In the context of Io, recent efforts by Becker and Geissler (2005) and Williams et al. (2011) have made some great initial progress integrating Galileo SSI and Voyager data into global data products capable of discriminating albedo, color, and morphology. These products are now available as ArcGIS products to the planetary community (http://pubs.usgs.gov/sim/3168/). Similar efforts to spatially register Voyager and Galileo SSI imagery of Europa have also been successful (Becker et al., 2001; USGS, 2002). However, similar comprehensive efforts have yet to be made and delivered to the PDS for Galileo NIMS data, the only hyperspectral imaging observations of outer solar system bodies. Here we have made an effort to remedy this situation transitioning the data set to PDS4 with ISIS3 processing support.

As of mid-2017, Galileo NIMS data are publicly available but not in a format that is readily accessible by the planetary community. This situation precludes the spectral investigation of surface and atmospheric chemistry and mineralogy for these objects. Several aspects of the NIMS data archive contribute to this circumstance, including VAX formatted data files (a platform and format abandoned by the PDS), a challenging radiometric calibration, and the absence of a rigorous camera/sensor model, and/or data products that have been orthorectified or spatially controlled relative to SSI observations or more recent Cassini data products (e.g., VIMS). NIMS data are also not easily accessible by the planetary community. Before this work, NIMS data were only compatible with ISIS2, a program no longer supported by the USGS and no longer functions on some modern computer operating systems (e.g., Apple OS X). Galileo NIMS data were also not compatible with mainstream planetary software, including ENVI/IDL or ISIS3. This effort transitioned the data set to ISIS3 and thereby ISIS3 support interfaces.

The NIMS PDS archive contains tube and g-cube data derived from the EDRs. Considering the relatively small scope of this effort only the NIMS tube and g-cube product data are the focus of this work. EDRs will be addressed in subsequent work on the data set if deemed necessary. Tube products contain ancillary geometric data for each pixel including latitude, longitude, incidence, emission and phase angles. G-cubes are resampled map projections of these tubes. These data are stored in 4-byte VAX FLOAT real values. The objective of this work is to reformat and re-archive the Galileo NIMS data set into a more easily accessible data format. In order to do this we outlined three basic objectives:

Objective 1: Create an ISIS application that reads and converts the NIMS data cubes into native ISIS3 cubes. NIMS data in the PDS is stored in VAX FLOAT format which is mostly obsolete and not widely used in the community any longer. This objective would ential adding support for conversion of VAX FLOAT to IEEE FLOAT in ISIS; advantageous to the pursuit is existing code in ISIS2 that provided a basis for this work. Here we also sought to seek out problems with the NIMS labels in PDS archive that are not compliant with PDS4 standards. These labels errors are to then be corrected and exported with properly formed labels to the PDS archive.

Objective 3: Derivation of a PDS4 compliant archive of the results of our study and provide it to the PDS for general distribution. These basic initial steps will make NIMS more user friendly and provide active support through ISIS help interfaces.

Time Period of Content Begin
19 January 1996
Time Period of Content End
3 May 2002
Currentness Reference
Ground condition
Progress
Complete
Update Frequency
None planned
Logical Consistency Report
The new standard for PDS archival is PDS4, so the NIMS data products are being re-archived in PDS4 for compliance. The flexibility of the PDS4 Product XML schema allows us to describe the format of the ISIS3 cube rather than transforming the ISIS3 cube to another data format prior to submission to PDS. NIMS-to-PDS4 software was written in JAVA to take advantage of existing JAVA/XML libraries. The software parses header information from the ISIS3 cube, populates an XML template file, and creates PDS4 Product Labels for each data product. The software will also incorporate the map projection information generated by gllnims2isis and provide it in a Cartographic PDS4 object within the XML label; thought the files themselves were not reprojected. Finally, any header information describing NaN, max/min, or missing data values in the original VAX format will be converted to the appropriate IEEE value and recorded in the XML label with the corresponding PDS4 Special Constants XML tags.
Completeness Report

All NIMS CDRs were transitioned

ISIS Ingestion & Conversion: For ISIS to ingest NIMS tube and g-cube data we developed a utility that converts VAX FLOAT values to IEEE format. Further, label issues are corrected using new conversion tools developed in ISIS and propagated into the output ISIS3 label. These utilities are used in improvements to existing and the development of ISIS3 applications that support conversion of tube and g-cube spectral image cubes into ISIS3 compatible formats. A new application has been developed called gllnims2isis and was released in ISIS 3.4.12. This application takes NIMS data and splits each into complimentary ancillary and spectral data products. Additional functionality for the NIMS products was integrated into nocam2map function as well. This conversion of the data products will enable ISIS3 functionality to be utilized in the processing and analysis of the NIMS tube and g-cube data moving forward. It also provides utility for future photometric corrections and coregistration work. Continued support is provided by using the ISIS Support issue tracking system

ISIS Map Projection: The map projections that most of the NIMS PDS archive data are stored in, ‘point perspective’, are not currently compatible with ISIS projections (we and the USGS will continue to investigate this moving forward). As a consequence, we do not create a ‘Mapping group’ in the output ISIS3 cube. However, the nocam2map ISIS application can be used to reproject the data since we have latitude/longitude backplanes. As a result, we are adding the original projection parameters to a Mapping Information group in both the core and suffix cube labels. This group contains the mapping information from the archived image so that nocam2map will have the information needed to work with the NIMS data.