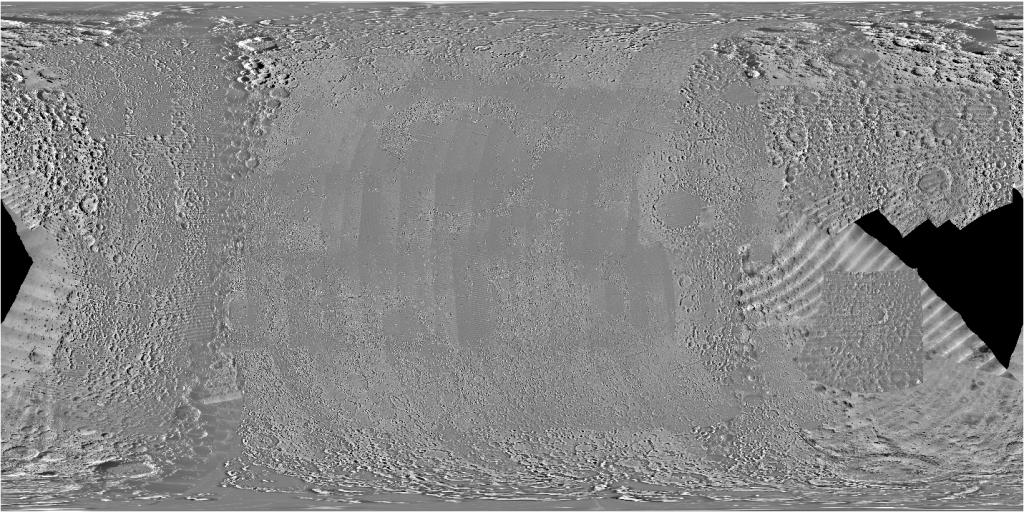 Digital film strips were cartographically processed to construct more than 200 individual frames and then geodetically corrected using the most recent lunar control network and topographic model (Gaddis et al., 2001). The result of this work is a moderate resolution, near-global, cartographically controlled digital mosaic of the Moon (Becker et al., 2008). The nominal resolution of the mosaic is ~60 meters per pixel (m).

This represents new Jpeg2000 mosaic which includes a couple updated tiles that were missing from the original March 2008 release. For this image a lossy compression using a quality flag of 10 was used. There should be almost no noticeable loss of data.

The Lunar Orbiters had an ingenious imaging system, which consisted of a dual-lens camera, a film processing unit, a readout scanner, and a film handling apparatus. Both lenses, a 610 mm (24 in) narrow angle high resolution (HR) lens and an 80 mm (3.1 in) wide angle medium resolution (MR) lens, placed their frame exposures on a single roll of 70 mm film (PDS IMG, 2018).

Currentness Reference
Publication date
Progress
Complete
Update Frequency
None planned
Logical Consistency Report
Observed Artifacts * Spacecraft faults: A majority of the frames contain random spacecraft processing faults, and these artifacts often look like "water mark" or "coffee ring" patterns. The faults occurred during processing of the film onboard the spacecraft. Data in these areas are lost and not recoverable. An overlapping frame covering the same area often does not have a processing fault. No attempt was made to remove these artifacts. * White Dashes: Every frame contains synchronized read-out (white) dashes along the film strip margins. The global mosaic was constructed with non-cosmetic "raw" frames containing these dashes. A first-order cosmetic enhancement process later removed the dashes on many of the constructed frames. Successful "no-dash" versions of the frames are available on the LO website listed above. Due to the difficulty of isolating the dashes from original data, the removal was not 100% successful for all frames and the no-dash LO data collection is incomplete. The no-dash LO frames were not included in the mosaic at the present time. * "Venetian Blind" Striping: Low-contrast striping across each frame remains in the LO mosaic. This "venetian blind" effect is a familiar characteristic of Lunar Orbiter data and it was caused by systematic variations in brightness levels across each film strip. The white dashes along the filmstrip margins also contribute to this apparent banding. * Film Strip Gaps: A number of frames display narrow data gaps between film strips. The gaps were not removed before mosaicking and can be particularly obvious where an overlapping frame shows through in the mosaic. These gaps were likely caused by data or film distortion during a mission readout process either onboard or transfer to Earth. Although the pre-exposed reseau marks (+) on the film were used rectify each digital film strip for frame construction, the number and spacing of the reseau marks were inadequate to fully remove the distortion in severe cases. * DEM Artifacts: There are a few areas in the global mosaic where spikes or artifacts in the ULCN 2005 topographic or digital elevation model (DEM) caused artifacts or errors in the LO mosaic. For each pixel in a LO frame, radius values from the same site in the DEM file are used to project the pixel onto the surface. Pronounced artifacts in the DEM were propagated to the projected LO image data. The resulting pattern in the LO mosaic is a "log cabin" or "checkerboard" effect where the image data is compromised in a few isolated areas. The ULCN 2005 DEM will continue to be evaluated and "smoothed" to remove these artifacts in the future.
Completeness Report

The near side (pole-to-pole) LO mosaic is complete using LO IV HR camera data. Far side coverage is dominated by limb and terminator views acquired by LO V HR and MR cameras. Also included is a single view obtained by LO III HR and MR cameras that provides coverage at the southern far side (centered on crater Tsiolkovskiy). To fill in gaps where possible, LO IV MR data are included. The mid-latitude empty area across the far side is a LO data gap. Data coverage in this region acquired by LO I, II and IV could not be cartographically processed due to poor quality, lack of reseau marks on film, or unexposed fiducial marks.

The LO spacecraft orbit and camera angles for each frame were adjusted to the ULCN 2005 using a least squares photogrammetric triangulation. Overlapping frames share control point pixel measurements in addition to measurements to existing points within the ULCN 2005. Selected NASA Clementine 750-nm basemap image tiles were used as the image reference for the ULCN 2005 points measured in LO frames. The latitude, longitude and radius values for the ULCN 2005 control points were fixed as .ground truth. in the LO global solution. For each LO exposure, adjusting both the LO spacecraft position and the camera angles reduced the maximum RMS errors by a factor of two.

As each frame was projected into the equirectangular map projection, the ULCN 2005 DEM was used to map every pixel to the surface topography according to the radius value within the DEM. This orthorectifation of the frames resulted in a high-order registration of features across and within overlapping projected frames. The LO global mosaic is the first digital map product constructed based on both the horizontal (latitude, longitude) and vertical (topography) ULCN 2005 geometry and DEM.

Cosmetic processing has not been applied to the data included the global mosaic. A high-pass filter was applied to the frames before mosaicking to normalize the relative brightness, especially in terminator regions across the far side. The results accentuate the high frequency information by retaining only 10% of the low frequency brightness variation.

Horizontal Positional Accuracy Value
1000
Horizontal Positional Accuracy Report
Accurate to Control Net
Entity and Attribute Detailed Description
Cosmetic processing has not been applied to the data included the global mosaic. A high-pass filter was applied to the frames before mosaicking to normalize the relative brightness, especially in terminator regions across the far side. The results accentuate the high frequency information by retaining only 10% of the low frequency brightness variation.