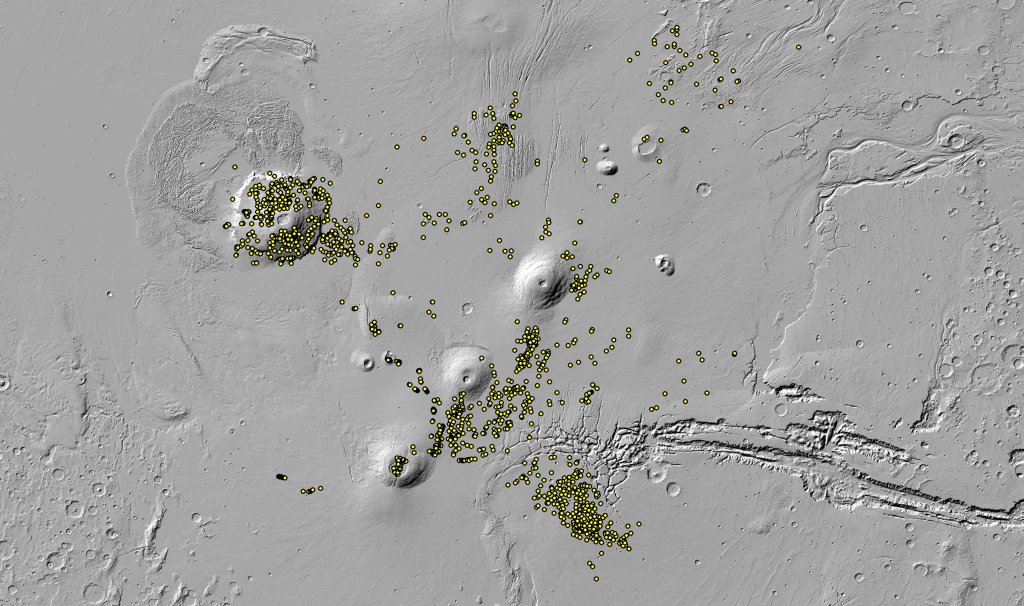 Volcanic vents are spatially cataloged as single points, referencing their plan view position with respect to the THEMIS infrared (IR) day-time mosaic and the gridded MOLA dataset base maps. Each datum is assumed to represent the four-dimensional (space and time) pathway along which magma ascended through the crust to erupt at the surface and produce an identifiable vent structure. Within this catalog volcanic vents are defined as positive topographic landforms, tens to hundreds of meters in height, with flows or flow-like textures radiating from the apex and/or summit depressions. Many positive topographic landforms lack clear flow features or a preserved depression at the apex, but are otherwise morphologically similar to cataloged vents. These landforms, which are tens to hundreds of meters in height, are also cataloged. It is assumed that many volcanic vents that formed across the Tharsis region have since been buried by continued volcanism or other processes. This catalog provides no inferences about buried vents, nor does this catalog provide any information about stalled magma bodies for which ascension pathways were established but did not lead to surface. Instead, vents that are currently identifiable on the surface are assumed to represent the last stage of eruptive activity in the region. This catalog does not differentiate vent types based on morphology (fissures vs. shields) or inferred eruption conditions. Each point simply represents a site at which we believe magma was erupted onto the surface of Mars. New vent features are identified as data collection continues at Mars and the catalog will be updated appropriately. Thus, this dataset can be used as a starting point for future projects that investigate distributed volcanism across Tharsis.

Mars Express is a mission of the European Space Agency (ESA) it launched in June 2003 onboard a Soyuz-Fregat launcher from the Baikonur Cosmodrome in Kazakhstan. The High/Super Resolution Stereo Colour Imager (HRSC) is one of seven instrument suites onboard Mars Express. The HRSC is imaging the entire planet in full color, 3D and with a resolution of about 10 meters (PDS IMG, 2018).

2001 Mars Odyssey launched on April 7, 2001, and arrived at Mars on October 24, 2001 as part of NASA's Mars Exploration Program, a long-term effort of robotic exploration of the red planet. The 2001 Mars Odyssey carries three star cameras, the Mars Radiation Environment Experiment (MARIE), which measures the near-space radiation environment as related to the radiation-related risk to human explorers, the Thermal Emission Imaging System (THEMIS), which maps the mineralogy of the martian surface using a high-resolution camera and a thermal infrared imaging spectrometer, and the Gamma-Ray Spectrometer (GRS), which maps the elemental composition of the surface and determine the abundance of hydrogen in the shallow subsurface (PDS IMG, 2018a).

The Viking Landers transmitted images of the surface, took surface samples and analyzed them for composition and signs of life, studied atmospheric composition and meteorology, and deployed seismometers. The Viking 2 Lander ended communications on April 11, 1980, and the Viking 1 Lander on November 13, 1982, after transmitting over 1400 images of the two sites.

We hypothesize that fields of small vents in the Tharsis province are representative of significant magmatic events much as they are on the Earth, and that together with detailed mapping, statistical studies will provide insight into the role that small vent field formation played in the development of the province.

Currentness Reference
Publication date
Progress
In Work
Update Frequency
As needed
Logical Consistency Report
This catalog does not differentiate vent types based on morphology (fissures vs. shields) or inferred eruption conditions. Each point simply represents a site at which we believe magma was erupted onto the surface of Mars. New vent features are identified as data collection continues at Mars and the catalog will be updated appropriately.
Completeness Report

This dataset can be used as a starting point for future projects that investigate distributed volcanism across Tharsis.