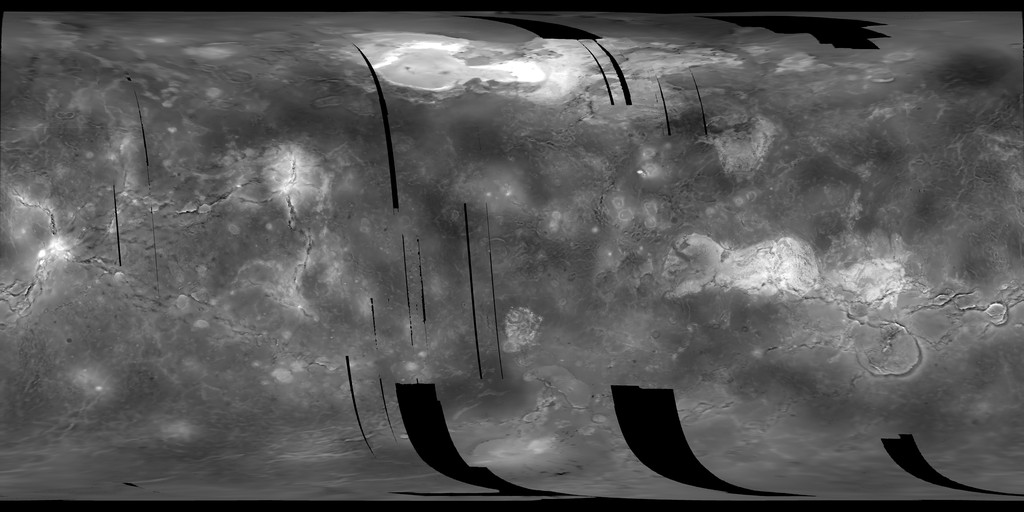 The represents the version 2 (1997 release) of the Global Topographic Data Record (GTDR-SINUS.3;2). The range to surface is derived by fitting altimeter echoes from the fan-beam altimetry antenna as a function of time to Hagfors' radar backscatter model templates. The ranges are subtracted from the spacecraft radial coordinate (derived from Doppler tracking), yielding measurements of planetary radius. The data are filtered to remove low-frequency errors in the in-plane elements of each spacecraft orbit, and then originally re-sampled into sinusoidal, Mercator, and north and south polar stereographic projections at a resolution of 5 kilometers per pixel (4641 meters per pixel [m]).

Each GTDR pixel is represented by a 16-bit integer. Pixels lying outside the domain of the projection are set to NoData (-32768). In all images, pixels with unknown or unmeasured values are also set to NoData. The remaining values have been processed into elevations with a data range of -2951 to 11687 meters.

To return these values from elevation back to radius values use the following equation: Radius = DN + 6051000.0

Topographic elevation in meters as collected from Magellan altimetry.

The original PDS release was map projected to Simple Cylindrical and the offset and scaler were applied to return elevation values with the range from -2951 to 11687 meters.