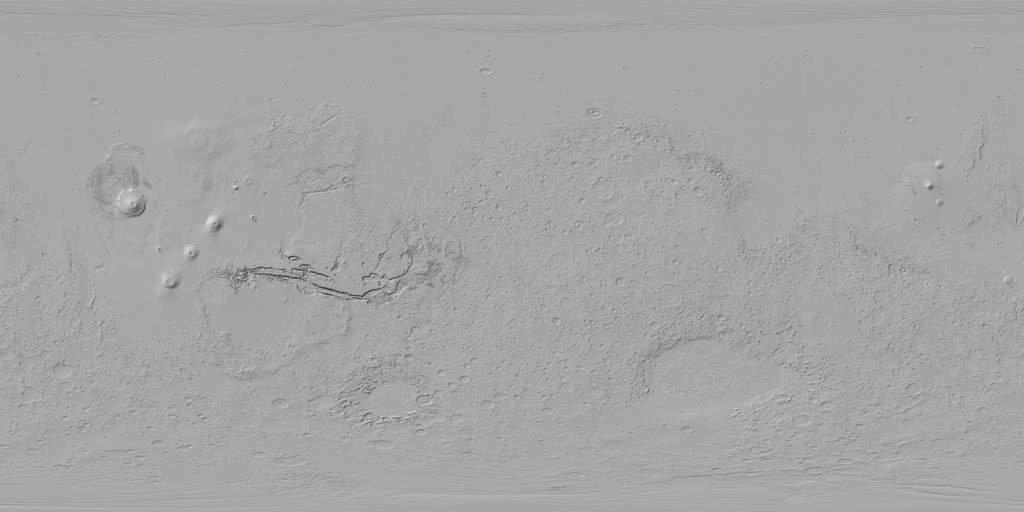 This is a shaded relief of the original DEM described next. This data product, now at version 2, is a blend of digital elevation model (DEM) data derived from the Mars Orbiter Laser Altimeter (MOLA), an instrument aboard NASA’s Mars Global Surveyor spacecraft (MGS), and the High-Resolution Stereo Camera (HRSC), an instrument aboard the European Space Agency’s (ESA) Mars Express spacecraft (MEX). This was created in support of thermal modelling studies and product creation for Mars (Fergason, Laura and Hare, 2017; Laura & Fergason, 2016).

MOLA fired infrared laser pulses downward 10 times per second and measured the time it took for the reflected pulses to return from the surface. The image used for the MOLA base of this map represents more than 600 million measurements gathered between 1999 and 2001. The average accuracy of each point is originally ~100 meters in horizontal position and the total elevation uncertainty is at least ±3 m. MOLA produced global topographic coverage with a spatial resolution of about 300 x 1000 m at the equator, and better near the poles.

HRSC, the only dedicated stereo camera orbiting Mars, is a multi-sensor push broom instrument comprising 9 CCD line sensors mounted in parallel for simultaneous high-resolution stereo, multicolor and multi-phase imaging by delivering 9 superimposed image swaths. The HRSC design permits stereo imaging with triple to quintuple panchromatic along-track stereo including a nadir-directed, forward and aft-looking (+/-18.91), and 2 inner (+/-12.81) stereo line sensors. The along-track acquisition of stereo imagery avoids changes in atmospheric and illumination conditions. The sub-pixel accuracy of the three-dimensional point determination allows the derivation of DEMs with a grid size of up to 50 m and a height accuracy of a single pixel with up to 10 m. Pixel resolution for this DEM is 200 meters per pixel (m).

This shaded relief (hillshade) is just a visual representation for the original DEM.

This is a hillshade of the original blended DEM. Hillshade exxageration is about 2X using gdaldem.

Product Information: This data product, now at version 2, is a blend…