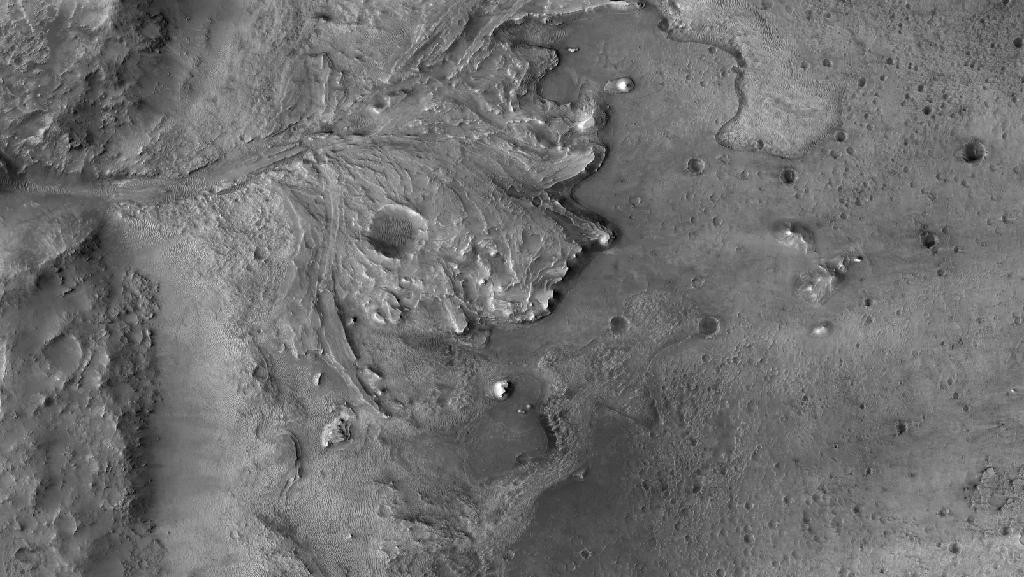 The Mars 2020 rover will explore Jezero crater, Mars to investigate an ancient delta for evidence of past microbial life and to better understand the geologic history of the region. The landing system onboard Mars 2020 will use technology developed at the Jet Propulsion Laboratory (JPL) called Terrain Relative Navigation (TRN), which will enable the spacecraft to autonomously avoid hazards (e.g., rock fields, crater rims) that exceed the safety requirements of the landing system. This capability allows small-scale hazards to be present in the landing ellipse, providing greater flexibility in selecting a landing location. In support of TRN, the USGS Astrogeology Science Center has generated and delivered a High-Resolution Imaging Science Experiment (HiRISE) digital terrain model (DTM) mosaic and orthomosaic that is the basemap onto which surface hazards were mapped. The hazard map will be onboard the spacecraft and used by TRN to help identify the final, hazard-free landing location. This mosaic is available on this site, along with the individual HiRISE orthorectified images that make up the mosaic and the HiRISE DTMs used to derive the orthorectified images.

Derived JPL Surface Operations Mosaic: This mosaic was finalized at JPL specifically for surface operations and mapping. It use the same individual images provide here but optimized for visual purposes using slightly differing seamlines and a 120 pixel blend across the input images. It uses an orthographic map projection centered on the landing site (77.4298 Lon, 18.4663 Lat). Download GeoTIFF (3.2 GB LZW compressed)

The purpose of this work was to generate and a High-Resolution Imaging Science Experiment (HiRISE) orthorectified mosaic to support the identification of surface hazards and facilitate the development of the hazard map that will be onboard the spacecraft and used by TRN to help identify the final, hazard-free landing location.

Time Period of Content Begin
1 January 2006
Time Period of Content End
24 October 2019
Currentness Reference
Publication date
Progress
Complete
Update Frequency
None planned
Logical Consistency Report
All pairwise combinations of HiRISE orthoimages derived from the nadir-most members of each stereopair are registered to better than 3 meters at the 99th percentile, with most overlapping images registered to better than 1.1 meters at the 99th percentile. The HiRISE orthomosaic was also compared to the CTX orthomosaic (i.e., Lander Vision System (LVS) map) and we believe the result that 94.1% of matched features have displacements <6 meters is conservative, and that the actual percentile is closer to the formal requirement of 99%.
To assess the horizontal registration, measurements between orthorectified images were made using the Open Source software package IMCORR (https://nsidc.org/data/velmap/imcorr.html). The approach used by IMCORR is the same basic matching strategy used in a variety of stereo photogrammetry software packages, and when applied to a pair of orthorectified images, the results can be interpreted as a measure of the co-registration of the images.
Completeness Report

The underlying DTMs were produced using SOCET SET and following a standard USGS process for generating HiRISE DTMs. This process involves manually designating 16 tiepoints and running a relative bundle adjustment to improve the initial alignment of images in each stereopair, followed by adding elevation information to each tie point from the Context Camera DTM mosaic (i.e., Lander Vision System (LVS) elevation map, generated by the USGS). The control network was then densified using Automatic Point Matching (APM) in SOCET SET, and bundle adjustment was run again. DTMs were then extracted from each stereopair at 1-meter post spacing and passed to Ames Stereo Pipeline (ASP). The individual HiRISE DTMs were rigidly aligned to one another using the pc_align program from the ASP software. pc_align is an implementation of an iterative closest points (ICP) algorithm. A temporary DTM mosaic was generated from these relatively-aligned HiRISE DTMs and subsequently aligned to the CTX LVS elevation map in order to bring the HiRISE DTMs into absolute alignment with an independent reference. All runs of pc_align allowed three-dimensional translation and rotation.

Rather than mosaicking DTMs that had already been resampled multiple times in pc_align, the transformation matrices (rotation and translation) determined by pc_align were applied to the tie points associated with each stereo pair in SOCET SET. The transformed tie points were then treated as ground control points and used to perform an additional bundle adjustment of each stereopair in SOCET SET. The positions of the images were the starting point for performing a joint bundle adjustment of all 14 images in SOCET SET. This joint bundle adjustment was accomplished by first merging the individual stereo models into a single SOCET SET project, manually designating tiepoints between overlapping images, and manually filtering the existing set of ground control points to include only a few dozen points spread evenly across all seven stereomodels. The inclusion of tiepoints in areas of overlap between (potentially) more than two images establishes a more precise relationship between the HiRISE images. The inclusion of ground control points constrains the bundle adjustment solution to a state that is close to the "true" ground coordinates as defined by the CTX reference data while still allowing the HiRISE images to move relative to one another. The jointly bundle-adjusted images were then used to extract HiRISE DTMs that are absolutely aligned to CTX. These DTMs were then manually edited.

After editing, the HiRISE images were then orthorectified onto their corresponding DTM in SOCET SET. The resulting orthoimages and DTMs were exported from SOCET SET into ISIS3 cube format following standard procedures used by the USGS. To transform the image data exported from SOCET SET into the final, cropped mosaics and to address horizontal misregistration between the HiRISE and CTX products, the following operations were performed. A scale distortion between the HiRISE and CTX mosaics was identified. To address this concern, a single two-dimensional (or first-order) affine transformation (translation, rotation, and scale) was determined based on an intermediate HiRISE mosaic product in order to preserve the excellent horizontal co-registration accuracy between individual HiRISE images achieved through the process described above. The two-dimensional affine transformation was then applied using Esri's ArcGIS Pro application to each 1-meter edited DTM and 0.25-meter orthoimage that were exported from SOCET SET in order to bring them into horizontal alignment with the CTX reference data (i.e., LVS appearance map) and correct for horizontal scale distortions in the HiRISE image data. The affine-transformed 1-meter DTMs and 0.25-meter orthoimages were then reprojected into a common projection using the Open Source GDAL program gdalwarp and bilinear resampling (https://gdal.org/).

After applying the affine transformation of HiRISE to CTX, uncropped mosaics of the orthoimages and the DTMs were created. Mosaicking was accomplished using the dem_mosaic tool from ASP. The order of images in the mosaic stack was chosen to limit the number and length of image seams within the landing ellipse and to ensure the highest quality DTM data was on top. The orthoimage mosaics consist of the nadir-most member of each of the HiRISE stereo image pairs, with the exception for using the off-nadir image PSP_003798_1985 (replacing PSP_002387_1985). The nadir-most image PSP_002387_1985 contained NoDATA gaps between several HiRISE CCDs and was adversely impacting the orthoimage mosaic process.

During the mosaicking process we also implemented methods to both match the tone, or brightness, between images and remove any remaining seams observed. To tone match the HiRISE images, the ESP_036618_1985_SOUTH and ESP_036618_1985_NORTH images required a slight tonal shift. A single DN value of 10 was subtracted from these two ortho images using the GDAL program gdal_translate. Similarly, the newly introduced off-nadir image, PSP_003798_1985, also required a tonal shift (but only down by 9). No seam blending was applied during the creation of the 0.25 meter orthoimage mosaics using the ASP dem_mosaic program.

For the CR (Crater Rim, the far-western DTM) stereo-pair, we encountered several quality issues due to uncompensated y-parallax. Fortunately, this stereo-model is completely outside the landing ellipse, but users should be cautious when using this area for analysis.