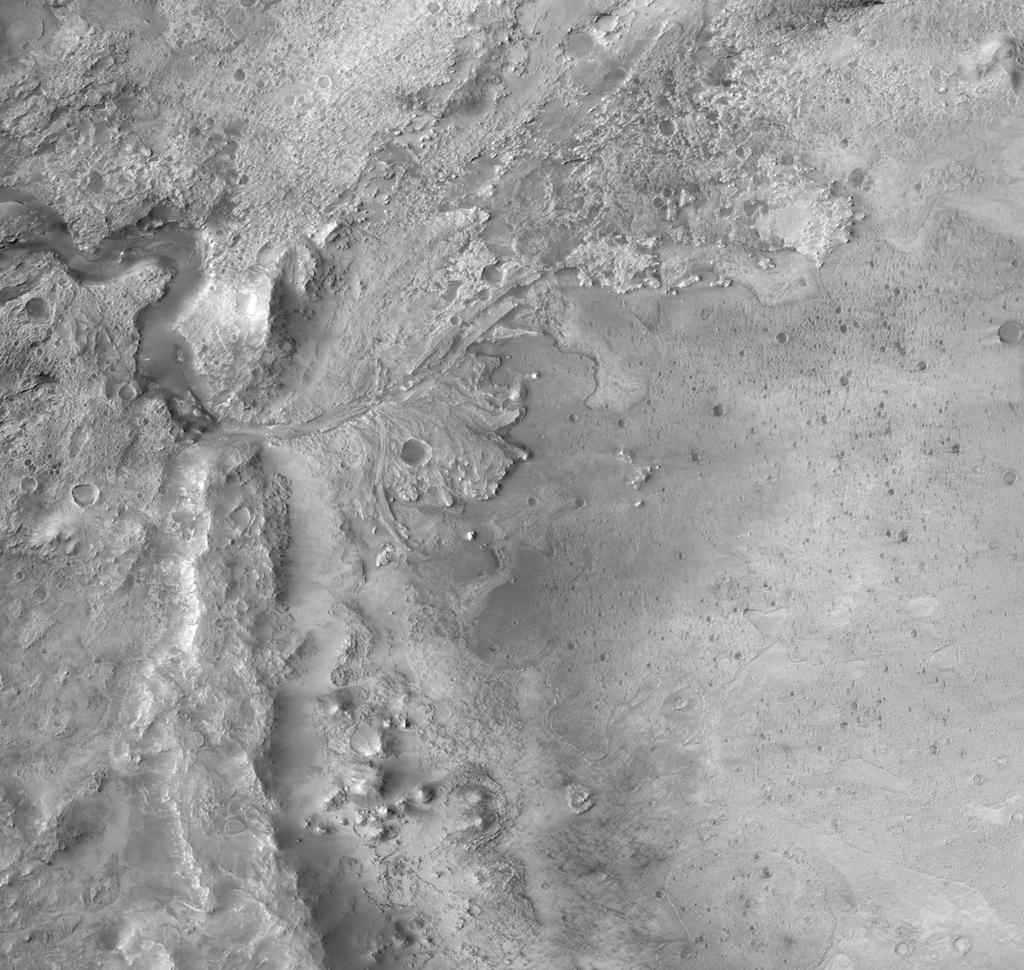 This is a visible image mosaic generated from the Context Camera (CTX) images from the Mars Reconnaissance Orbiter mission. This product is the Lander Visions System (LVS) map that will be onboard the spacecraft and will be the "truth" dataset that TRN will use to orient itself relative to the surface during Entry, Decent, and Landing. The images were orthorectified using digital terrain models (DTMs) created from CTX stereo images. The mosaic is generated at the same resolution at which the individual CTX images were acquired, which is approximately 6 meters per pixel. This mosaic was created in support of the Mars 2020 rover, which will explore Jezero crater, Mars to investigate an ancient delta for evidence of past microbial life and to better understand the geologic history of the region. The landing system onboard Mars 2020 will use technology developed at the Jet Propulsion Laboratory (JPL) called Terrain Relative Navigation (TRN), which will enable the spacecraft to autonomously avoid hazards (e.g., rock fields, crater rims) that exceed the safety requirements of the landing system. This capability allows small-scale hazards to be present in the landing ellipse, providing greater flexibility in selecting a landing location. In support of TRN, the USGS Astrogeology Science Center has generated and delivered this product, which is the Lander Vision System (LVS) map. This mosaic is available on this site, along with the individual CTX orthorectified images that make up the mosaic and the CTX DTMs used to derive the orthorectified images.

The purpose of this work was to generate and deliver the Lander Vision System (LVS) map generated from three Context Camera (CTX) orthorectified images that will be onboard the spacecraft and will be the "truth" dataset that TRN will use to orient itself relative to the surface during Entry, Decent, and Landing. This mosaic also served as the ground truth data set for the High-Resolution Imaging Science Experiment (HiRISE) orthomosaic that was the basemap onto which surface hazards were mapped.

Time Period of Content Begin
1 January 2006
Time Period of Content End
20 August 2019
Currentness Reference
Publication date
Progress
Complete
Update Frequency
None planned
Logical Consistency Report
The individual CTX images have an average horizontal displacement of 9.6 meters. Thus, these products and the resulting mosaic meet, and often exceed, the requirements for TRN.
To assess the horizontal registration, measurements between orthorectified images were made using the Open Source software package IMCORR (https://nsidc.org/data/velmap/imcorr.html). The approach used by IMCORR is the same basic matching strategy used in a variety of stereo photogrammetry software packages, and when applied to a pair of orthorectified images, the results can be interpreted as a measure of the co-registration of the images.

To achieve the required horizontal and vertical co-registration requirements for the Lander Visions System (LVS) map that will be onboard the Mars 2020 spacecraft, we developed a DTM mosaic generation pipeline using a combination of SOCET SET from BAE Systems and the Ames Stereo Pipeline (ASP) software. The images in this mosaic were orthorectified using DTMs created from CTX stereo images using this process. We first improved our CTX image pre-processing pipeline to include capabilities that utilize camera model and jitter-correction improvements developed and provided by JPL. These modifications have significantly improved the positional knowledge of the images relative to the martian surface and have allowed us to generate DTMs without the need for a typically required bundle adjustment. Omitting this step was desirable, as TRN is sensitive to non-linear distortions that could potentially be introduced by a bundle adjustment.

After DTMs were produced using SOCET SET from input images and image metadata provided by JPL, the initial DTMs were then rigidly aligned to one another using the pc_align program from ASP, allowing only a translation adjustment. The relatively-aligned DTMs were then simultaneously aligned using ASP to the High Resolution Stereo Camera (HRSC) Level 5 DTM to bring them into absolute alignment with an independent reference. The CTX DTMs have been manually edited to remove erroneous posts. Manual editing to modify these incorrect elevation values improves the quality and accuracy of the DTM, thereby improving the quality and accuracy of derived orthorectified images. The orthorectified images were derived from the nadir-most member of each stereopair (6 meters per pixel) and were mosaicked using the Ames Stereo Pipeline program dem_mosaic.

The TRN landing system is sensitive to image seams within the mosaic, and so we have implemented methods to both match the tone, or brightness, between images and remove any remaining seams observed. Tone matching was a manual process to align the tone of each individual orthoimage. A single value was added across an entire image to shift each individual image to one another using the Open Source GDAL program gdal_translate (https://gdal.org/). In order to match CTX image J21, an offset of 30.0 was added to J03 and offset of 15.0 was subtracted from F05.

There is a small region within the northwest corner of the cropped CTX mosaic bounding box that is not covered by a CTX DTM. To fill this region for a continuous mosaic, we orthorectified CTX image J03_046060_1986_XN_18N282W onto the HRSC DT5 product and placed the resulting orthoimage into the final orthomosaic.