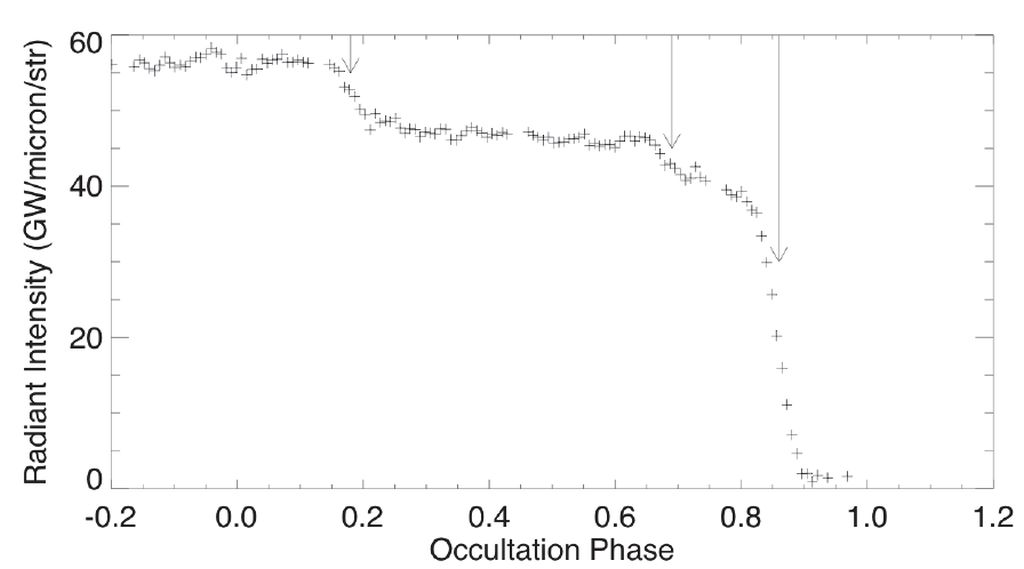 The Io occultation lightcurve dataset consists of observations of Io while it is in eclipse and being occulted by Jupiter. The observations are obtained in the L’ prime (3.5 micron) band at the InfraRed Telescope Facility (IRTF) in Mauna Kea using one of 3 instruments: NSFCam, SPEX, or iShell. For SPEX and iShell, we used the guiding camera to obtain images of Io. In-eclipse, all of the energy at near-infrared wavelengths is endogenic to Io and, therefore, originates from the surface volcanoes. As a result, the occultation lightcurves appear as step functions with each step indicating the occultation of one or more volcanoes with a total brightness equal to the height of the step. The timing of the occultation can be used to determine the location of Jupiter’s limb on Io and, thus, the one-dimensional location of the active volcano being measured (Spencer et al., 1990). An example occultation disappearance curve from June 30, 1997 can be seen in the reference Rathbun and Spencer, 2010.

The primary PDS4 product for this dataset consists of two files for each occultation observed: the PDS4 label and the data table. The PDS4 label (*.xml) is a XML file that contains metadata about how the data in the table were acquired and information on the physical structure of the table. The data table contains 3 columns of information, described below. The name of each file gives the date of the observation with the first 2 digits giving the year (anything above 85 is in the 1900s, the rest are in the 2000s), the next 2 the month and the final 2 the day of the month. Data Table Column Descriptions Each table contains a different number of rows, but there are generally approximately 100 rows per file. Each row describes an observation and has 3 columns with a combined total of 38-characters.

The data were collected at the IRTF in Mauna Kea. We collect images of Io as Jupiter is occulting it. Depending on the season, either the occultation disappearance or reappearance will occur while Io is in eclipse. The eclipsed occultation is the one we observe. During the approximately 5 minute occultation we collect nearly 100 images (depending on the instrument used). Our observing runs last a total of 90 minutes and include observations of Io in eclipse and relevant standard stars. We average ~10 observations per year with high variability. In 2017, for example, we successfully observed 17 Io occultations while in 2013 it was only 3.

We have used NSFCAM, and the guide cameras for both SPEX and iShell. NSFCAM was our preferred instrument, since it was a camera, but has not been in operation for several years (mid-2010s). SPEX and iShell give similar results, and, by using both we increase our opportunities to be assigned telescope time. For each occultation, we determine calculate an average image of Jupiter using images where Io is completely occulted. We subtract this Jupiter image from each image obtained in order to have an image of just Io. We use the observed standard stars to convert from instrument data number (DN) to physical units of GW/micron/str.

The Io occultation lightcurve dataset consists of observations of Io…