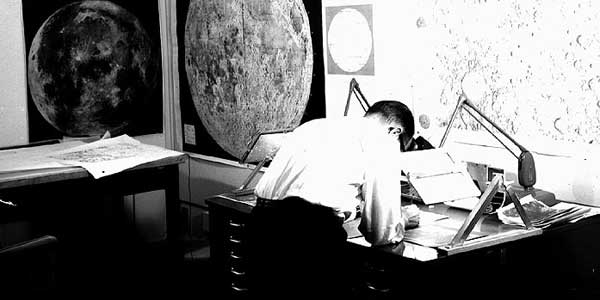 Don Wilhelms Mapping the Moon at the Menlo Park Office 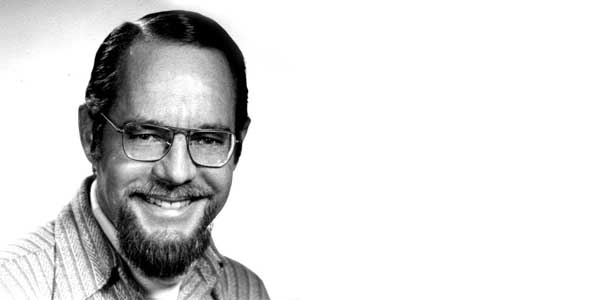 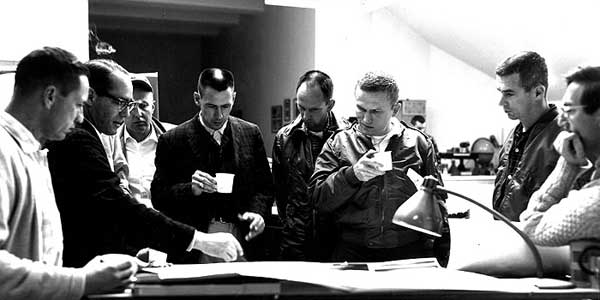 With his geologic mapping of the Moon, Don Wilhelms set the methods and standards for planetary mapping. He is author of Geologic History of the Moon (1987, USGS Professional Paper 1348) and To a Rocky Moon, A Geologist's History of Lunar Exploration (1993, University of Arizona Press), as well as many other science publications and planetary geologic maps. Don helped train Apollo astronauts and served as a professional expert on news broadcasts in Germany during the Apollo 11 Moon landing. He is an elected fellow of American Association for the Advancement of Science, American Geophysical Union, and Geological Society of America, and was awarded the prestigious Geological Society of America G.K. Gilbert Award in 1988.

The only child of William and Allene Wilhelms, Don was born in Hollywood, California, on July 5, 1930. William was an engineer who kept the electronic equipment at NBC working; Allene was a housewife. When he was about 12 or 13, Don became interested in astronomy, making many visits to Griffith Observatory in Los Angeles. His introduction to geology began with the observatory's interesting displays that included narrated histories of Earth. In Fairfax High School in Los Angeles (1945-1948), he showed an aptitude for science and had his first geology class in Pomona College as an undergraduate student. Pomona had a humanities and liberal arts requirement, and to help fulfill it, he enrolled in a Greek drama class. However, lucky for Astrogeology, he found the drama class so boring that he switched to beginning geology instead. He graduated from Pomona in 1952 with a Bachelor of Arts degree in geology and attended the University of California, Berkeley for one year. Don disliked the professors at Berkeley and gladly accepted being drafted into the Army in 1953. Except for basic training, the Army was a positive experience because he was stationed in Schwetzingen, Germany, near beautiful Heidelberg.

After his 2-year stint in the Army, Wilhelms returned to California in 1955. That winter, not sure what to do, Don took a trip in the West, as far as Zuni, New Mexico, for the Shalako ceremony, then returned home via Route 66. Admiring the colorful, rocky landscape around the continental divide, Don decided to return to academia and pursue an advanced degree in geology. While supporting himself partly by pumping gas for the movie stars at a station in Hollywood, Don attended the University of California, Los Angeles (UCLA) from 1956 to 1960. He took 2 summer jobs during graduate school: one with the Vermont Geological Survey in 1958 mapping high-grade metamorphic rocks in the Green Mountains, and another in 1959 with Richfield Oil Co. describing sedimentary rocks in northern Alaska. He earned Master of Arts degree in geology in 1958 from UCLA, with a thesis topic based on mapping in Plumas County, Sierra Nevada, California. Undecided whether to go on for a Ph.D. degree, he took the plunge because at the time the requirement for 2 languages was easy for him-he knew German, and scientific French was no problem. In 1960, his knowledge of German also led to the award of a Fulbright scholarship, and Don spent a year at the University of Munich, Germany. He returned to UCLA to finish work on his doctorate degree from 1961 to 1962. His advisor was John Crowell, and the dissertation topic was the structure and stratigraphy of Paleozoic sedimentary rocks and Tertiary volcanic rocks in the Nopah and Resting Springs Ranges, Basin and Range province, California and Nevada. Although he is not proud of his two thesis mapping projects and he found that he disliked doing field geology, the work made him pay attention to field methods and principles. This concentration led him to successfully apply traditional field-mapping principles to mapping the Moon.

In 1962, the space program was really getting started. A friend told him that someone-Gene Shoemaker-was over at Caltech interviewing people for jobs in lunar geology with the USGS. Don got an interview with Gene. During the interview, Gene and Don discovered mutual interests in astronomy, Quaternary geology, geologic processes, and non-uniformitarianism, but Don did not receive a follow-up letter. This job, combining his old love of astronomy with his new immersion in geology was the only thing in life that Don really knew for certain that he wanted. He wrote Gene, restating his interest. Gene started the paperwork to hire Don in 1962. When Don was hired by the USGS, he was still writing his dissertation. Friday, November 30, he turned in his dissertation, and drove to Menlo Park to begin work on Monday, December 3rd, 1962. He was awarded his Ph.D. degree from UCLA in 1963.

After 6 months mapping the Moon using the telescope at Lick Observatory, Shoemaker sent Don to Paris to study polarization as a technique for interpreting lunar geology with Audouin Dollfus. Polarization was supposed to show the structure of the lunar surface soil, but proved little except that it correlates with surface albedo (relative brightness). Science aside, the two months in Europe were among the most pleasant in Don's life. The optimism of the Kennedy era had reached France, which was prosperous enough to sustain the good things in life, but was not yet excessively modern. He is still a francophile.

Don went on to live in Houston for a year to participate in astronaut instruction. He returned to Menlo Park and became deeply involved in the Lunar Orbiter and Apollo Programs, notably landing-site selection. His career evolved to include studies of Mars, Mercury, and Ganymede. He retired from the USGS in 1986. In retirement, he has been occupied with completing maps of Ganymede, studies of the martian highlands, and writing the book To a Rocky Moon. Of his many scientific accomplishments, Don feels the high points of his career were providing the overviews of the history and findings of lunar exploration in To a Rocky Moon and The Geologic History of the Moon.

Don Wilhelms is a focused, honest man, and he likes both details and the big picture. A confessed "pack rat", he keeps complete files. He is also afflicted with Asperger's Syndrome, a mild form of high-achieving autism. The disorder makes it difficult for him to recognize people or to be socially proficient, which others interpret as having a gruff personality. He has had to memorize and practice social skills, like learning a language. He believes planetary geology is a science that suits introverts and his personality. However, anyone who knows Don realizes that for all his gruff talk, he is really a very sweet, loyal guy who enjoys pleasurable experiences, such as good food, wine, women, and discussions. Don loves the Moon, San Francisco, his rustic Russian River second home, historical books, and things well done.

A really great time is to go to San Francisco and spend a afternoon with Don Wilhelms, talking, eating, drinking, sight-seeing, bar-hopping, and meeting people. Don is a smart, well-informed man, always fun, knows all the best places, knows all the good stories, and can introduce you to the most interesting people.