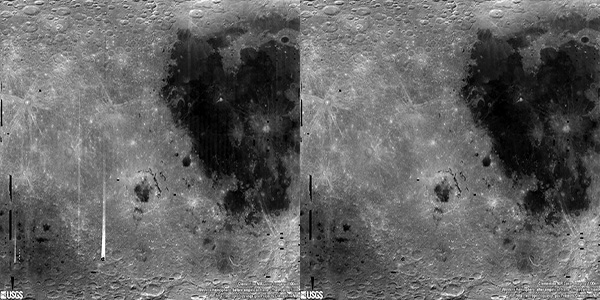 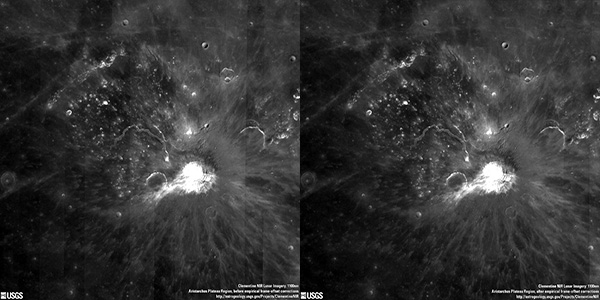 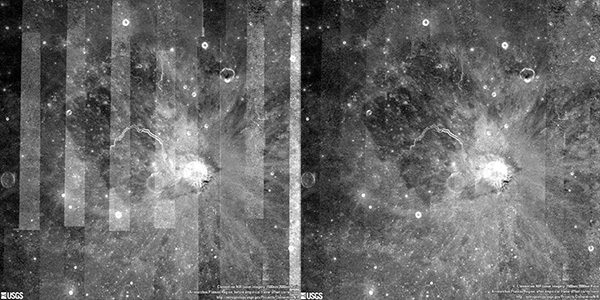 The Clementine near-infrared (NIR) images have been made available in two near-global (70° N to 70° S) reduced-resolution mosaics. The two versions include a standard calibrated and empirically calibrated multi-spectral (6-band) ISIS cube at 500 m/pixel spatial resolution.

In May and June of 1994, the NASA/DoD Clementine Mission acquired global, 11-band, multispectral data of the lunar surface using the ultraviolet-visible (UVVIS) and near-infrared (NIR) camera systems (e.g., Nozette et al, 1994; McEwen and Robinson, 1996). The global 5-band UVVIS Digital Image Model (DIM) of the Moon at 100 m/pixel was released to the Planetary Data System (PDS) in 2000 (Eliason et al., 1999). The NIR DIM has six spectral bands (1100, 1250, 1500, 2000, 2600, and 2780 nm) and will be delivered in 996 quads at 100 m/pixel (303 pixels/degree) in early 2004. This First Release NIR mosaic is processed to 500 m/pixel, has 6 spectral bands, and is presented in Simple Cylindrical map projection for the east (0° to 180° E) and west (180° to 360° E) lunar hemispheres. The NIR data have been radiometrically corrected, geometrically controlled to the Clementine 750-nm mosaic, and photometrically normalized to form seamless, uniformly illuminated mosaics of the lunar surface. The first four NIR bands (1100 to 2000 nm) have also been normalized to reflectance based on the approach previously applied to the calibrated UVVIS global mosaics (Pieters et al., 1999). The 2600 nm and 2780 nm NIR buands are provided as calibrated Clementine digital numbers (in counts/ms).

For these products, we used the radiometric camera model described in Lucey et al. (2000) along with a thermal background correction described in Eliason et al. (2003). Residual radiometric artifacts remain in these data and are clearly visible when a ratio of two NIR bands is generated. The artifacts are attributed to 1) the radiometric camera model having residual errors in the values associated with the instrument operating modes (gain, offset, and exposure values); 2) residual errors existing in the thermal background correction; and 3) the shading properties of the sensor array changing with the thermal conditions of the camera that have not been properly characterized.

In addition to the major radiometric and photometric processing, empirically derived frame offset corrections were applied to produce a second version of the global mosaics with reduced variability across camera modes and adjacent orbits. This additional processing resulted in the "empirically corrected" mosaics and is described in more detail below. Similar before-and-after comparisons are shown for the Aristarchus Plateau region and the eastern portion of the South Pole-Aitken basin region. Finally, 1500/2000-nm ratios of the western hemisphere and the Aristarchus Plateau are shown to illustrate the magnitude of the changes between the calibrated and empirically corrected versions of the NIR mosaics.