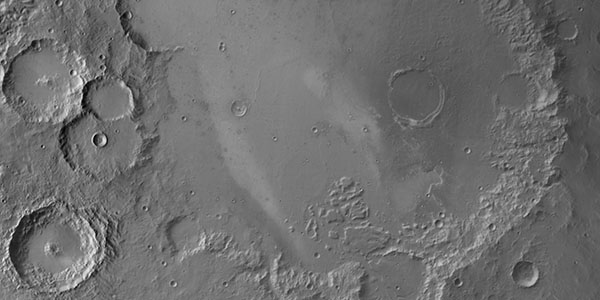 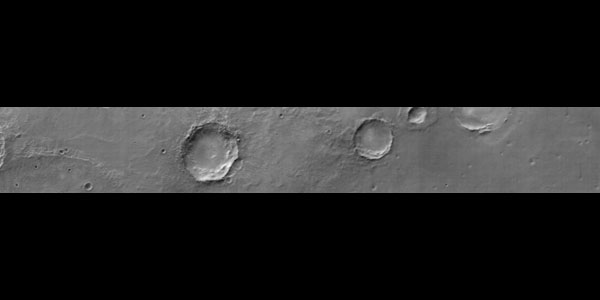 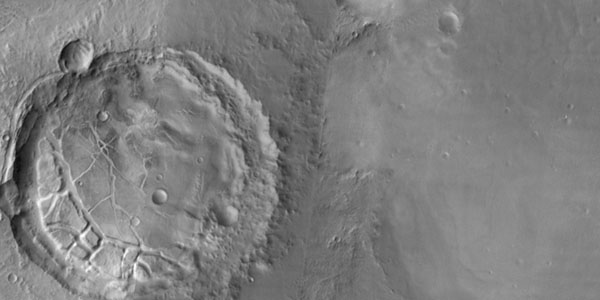 For the latest THEMIS controlled mosaics, please visit this page.

In 2003-2005, the USGS worked under the guidance of NASA's Mars Critical Data Products Initiative to conduct research on how controlled large area or global 2001 Mars Odyssey THEMIS IR image mosaics could be generated. The products listed here represent a sampling of the significant data files generated during that research.

Unpublished work related to this project include an initial plan and development of the theory to upgrade our framing camera photogrammetric software, the ISIS randlsq (RAND Least Squares Solution) program, in order to handle the adjustment of parameters related to THEMIS IR line scanner camera images. A document describing the algorithm and software changes was completed in 2004 December (Archinal, 2004). A further document (Archinal, 2005) describes the additional parameters actually added to the randlsq program.

As to the software development overall, we have completed the changes to the randlsq program and have completed both pre- and post-processing programs.

The randlsq program changes include substantial and significant changes, in order to handle the geometry of a (e.g. THEMIS IR) line scanner camera image as an addition to the existing capability to perform a photogrammetric solution with framing camera images. This includes substantial changes to the program control input, data input and output, and the calculation of partial derivatives for new parameters. These changes were generally along the lines of the (planning) documentation (Archinal 2004 and 2005). The status of these software changes is that we have not yet been able to perform satisfactory solutions and are tracing the cause or causes of the problems being encountered. In the meantime, the software is still capable of performing solutions for framing camera images as before, so will soon be released as part of the next update to the ISIS system. We will of course release (and provide additional documentation for) a version capable of processing the THEMIS IR image data when we have corrected the existing problems.

The preprocessing program, randcnet(RAND Control Net), accomplishes several routine tasks in setting up files for processing by randlsq. This includes: a) Converting image measurements from their ISIS qmatch program output format to mm measurements in the image plane, accounting for the THEMIS IR camera model and distortions as already implemented in ISIS; b) Deriving a priori information on control point locations in latitude, longitude, and (via a MOLA DEM) radii, and spacecraft position and pointing from NAIF SPICE SPK and CK kernels; and c) Setting up a control file for the randlsq program operation. Note that a significant part of the operation of this program is to read and fit the pointing and position information to second degree polynomials (parabolas) applicable during the duration of the image collection. It is the coefficients of these polynomials that are output for use and adjustment as the main function of the randlsq software.

The post-processing program, rand2kerns (RAND To Kernels), has the primary purpose of taking the spacecraft pointing and position information as recovered from the randlsq least squares photogrammetric solution and placing it back into NAIF SPICE SPK and CK formats. The updated SPICE data can then be used to project the now "controlled" images as necessary.

These latter two programs, randcnet, and rand2kerns, although completed and now well tested and operational, have not yet been released with the ISIS software, but will be as soon as randlsq itself is successfully working with the THEMIS IR line scanner camera images.

In order to test our new procedures and software, we have planned to perform several photogrammetric solutions. The first would be a test using a dense set of tie-point measurements between two THEMIS IR images. We then plan to proceed to three test solutions using several images and including the generation of controlled mosaics of those images. It is the files related to these solutions that are included in the Preliminary Products section below.

As to further details of these solutions, the first, using a dense set of measurements, is what we are still attempting to complete successfully. Under the heading "I. THEMIS IR Image Pair Test Data" we provide the match point file with the dense set of measures as well as the two test THEMIS IR images in several different formats. The primary purpose of collecting a very dense set of measures was to help evaluate the number of parameters actually necessary to adequately represent the relative and absolute geometry of the two (example) images. These measures may also prove useful at some later point in testing separately planned automatic tie point measurement algorithms and ISIS software.

We also provide files related to making test mosaics of the areas of the MER Spirit and Opportunity landing site ellipses. Here again, the image to image tie point measurement files are made available, as well as image to MOLA DIM tie point measurements. The MOLA DIMs were generated from 64 pixel/degree resolution MOLA DEMs and using the ISIS photomet software, and were illuminated and measured with respect to the images give in lists below. These MOLA measurements provide for an absolute connection to Mars IAU/IAG 2000 system coordinates. Also provided are uncontrolled mosaics of these areas made from the relevant images, using only the a priori NAIF SPICE information for these images. An examination of these mosaics will quickly reveal that they are already quite good, showing that the relative position of the images is apparently often known a priori to the few pixel level. However, examination at full resolution will still show some offsets along the image borders, showing that the a priori image geometry information is not good at the sub-pixel level. Once our software is fully working, we plan to make such sub-pixel controlled mosaics and compare them with these uncontrolled versions.

We had also planned to do testing with a third set of several images, covering the central portion of the Phoenix landing site region "C" (Arvidson, 2005). However, it appears currently that this region is not yet well covered by THEMIS IR images, so if we see a need for a further test mosaic we may chose one of the other two Phoenix landing site regions, or some other appropriate area for such a test.

In any case, our plans are to track down the current problem(s) with our solution algorithm or the randlsq software. We will then proceed to do controlled solutions of the image measurements, and to make the 2 or possibly 3 described controlled mosaics above, and compare the results to our uncontrolled products.

We plan to report our final results in an appropriate paper, and will also provide the controlled mosaics to the MER and Phoenix projects for their possible use.

Finally, we would like to take this opportunity to point out that we believe that this work is critical to future NASA Mars (and for that matter all other solar system) exploration. It will not only provide the only known tools for controlled mosaicking of THEMIS images, but we plan (under other funding) to develop it further in order to provide the same capabilities for Mars Global Surveyor MOC images, Mars Express HRSC images, and Mars Reconnaissance Orbiter HiRISE images.