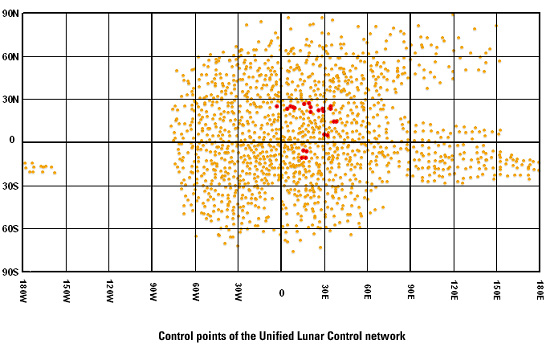 The USGS worked to digitize and restore a global set of Lunar Orbiter images and to assemble this into a global digital Lunar Orbiter mosaic of the Moon. A separate Lunar Orbiter Control network is being created as part of this work. For additional information, see the Lunar Orbiter Digitization Project [Gaddis et al., 2001a, 2001b, 2003; Becker et al., 2004].

Work by B. Archinal, M. Rosiek, and others at USGS was done to unify the ULCN and CLCN [Archinal and Rosiek, 2004], and to attempt to eliminate the large offsets in the CLCN. This was done by constraining as many ULCN points as possible within the CLCN, by using reasonable camera angle constraints (e.g. the 0.03 degree stated accuracy of Clementine pointing), and solving for tie point positions with realistic (at least +/- 1-2 km) radii, based on the current USGS lunar radii model [Rosiek et al. 1998; Rosiek and Aeschliman, 2001; Rosiek et al. 2001]. Still, we estimate that the horizontal accuracy of points in this network will still range from, at best, the 100 m to 3 km level of the ULCN, and accuracies of even more than 3 km will still be possible in areas away from the ULCN (e.g. on much of the far side).

Horizontal position differences for images as determined from original (NAIF) and RAND Clementine solution camera angles. As indicated in the legend, the colors indicate the differences in km (the sign indicates longitude direction). For 44,750 images, the mean difference is 7 km with a standard deviation of 5.5 km. 99% of the differences are less than 15 km. Data courtesy Anthony Cook.

The Clementine Lunar Control Network (CLCN) includes 543,245 measurements of 271,634 points on 43,871 Clementine 750-nm images-the largest planetary control network ever computed. It was completed at RAND by Merton Davies and Tim Colvin in 1997, in cooperation with the U. S. Geological Survey (Flagstaff). The purpose of this network was to determine the geometry for the Clementine 750-nm Base map Mosaic (CBM) [set of 15 CDs, USGS, 1997]. The geometry of that mosaic was used to produce the Clementine UVVIS digital image model [set of 78 CDs, USGS, 1999; Eliason et al., 1999] and the Near-Infrared (NIR) Global Multispectral Map of the Moon from Clementine [set of 78 CD's, USGS, in publication; Eliason et al., 2003]. Obviously many researchers use these products. Through such use, these products and the underlying CLCN in effect define the generally accepted current coordinate system for reporting and describing the location of lunar coordinates. However, no specific publication describes the CLCN itself.

The files from this network were transferred to the U. S. Geological Survey in 2000, as part of the transfer of geodesy work from RAND to USGS in 2000-2001 [Archinal et al., 2000, 2001, 2002a, 2002b, 2003]. They have also been made available upon request from either RAND or USGS. The Clementine spacecraft position and solved-for camera pointing angles (i.e. SPICE data) of the CLCN are also available as part of the USGS ISIS package.

Unfortunately, several authors [Malin and Ravine, 1998; Cook et al., 2002a, 2002b] have noted that the image bore sights based on the (original mission) NAIF (JPL Navigation and Ancillary Information Facility) SPICE information have offsets of as much as 13 km (or more) from those based on revised SPICE derived from the CLCN solution. Comparing the original and revised SPICE information shows minor differences (0.6 km) in the images' spacecraft positions and major differences (8.0 km) in the pointing angles [Cook et al., 2002]. See Figure 2 for a global map showing the locations and magnitudes of the horizontal offsets. These offsets indicate errors in the original CLCN.

These offsets appear to have originated from a combination of factors, including: a) only a small number (22) of tie points were used to fix CLCN coordinates to ULCN coordinates (see Figure 1), b) the camera angles were unconstrained in the CLCN solution; and c) the tie points were unrealistically constrained to lie on a sphere of radius 1736.7 km. Efforts are now underway to address these offsets (see Unified Lunar Control Network 2004 below).

The ULCN was described in the last major publication about a lunar control network [Davies et al., 1994]. This sparse network contains 1478 points, 1286 points on the near side and 192 points on the far side (Figure 1). Images for this network are from the Apollo, Mariner 10, and Galileo missions, and from Earth-based photographs. The expected horizontal position accuracy of points in this system runs from 100 m to 3 km, depending on the original image source. The importance of this network is that this accuracy is relatively well quantified and published information on the network is available.

The data in this file were originally published on microfiche as a part of Davies et al. [1994]. Diacritical marks used for crater names are missing in this ASCII version. Another version of this file is available as part of the Lunar Consortium Dataset. Fields here include:

Following are references cited in the above text, as well as various other references on the subject of lunar control networks.

The research descriped here has been funded in part bye the NASA Planetary Geology and Geophysics Program.