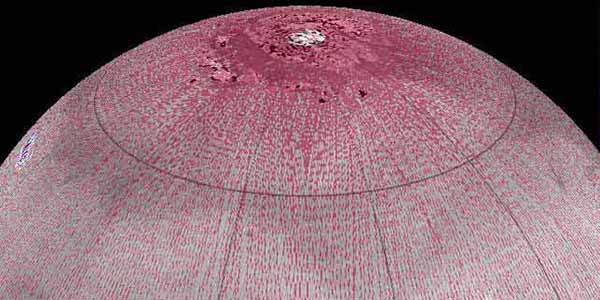 The U.S. Geological Survey has recently completed a final revised version of its 231 m/pixel global Viking image mosaic of Mars that has substantially improved geodetic accuracy compared to versions released in 1991 and 2001. This mosaic, known as MDIM 2.1, is currently available in the USGS ISIS file format and will be formatted and submitted to the NASA Planetary Data System (PDS) in the near future for archiving as a single ~5-MB DVD volume.

Positional control for MDIM 2.1 comes from a new geodetic/photogrammetric solution of the global Mars Mariner 9 and Viking image control network. The details of this network solution are described here. This network incorporates 1,054 Mariner 9 and 5,317 Viking Orbiter images. Accuracy of the new solution is improved primarily as the result of constraining all 37,652 control points to radii from Mars Orbiter Laser Altimeter (MOLA) data and adding 1,232 "ground control points" whose horizontal coordinates are also constrained by MOLA. The MOLA data are believed to have an absolute accuracy on the order of 100 m horizontally. Additional improvements result from use of updated timing and orientation data for the Viking Orbiter images, improved reseau measurements and hence distortion correction of the images, and careful checking and remeasurement of control points with large residuals. The RMS error of the solution is 15.8 m (~1.3 Viking pixels, ~280 m on the ground). The IAU/IAG 2000 coordinate system is used for the network and the mosaic.

The research described here has been funded in part by the NASA Planetary Geology and Geophysics Program.