Evidence of Cryovolcanism on Titan 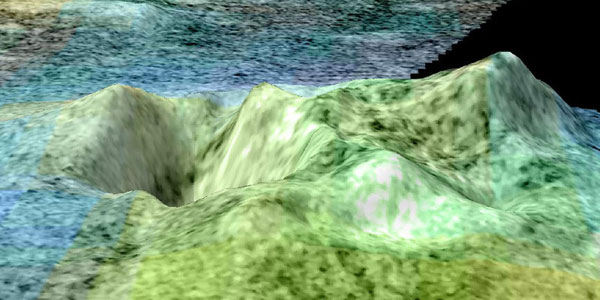 Flyover of Sotra Facula on Titan 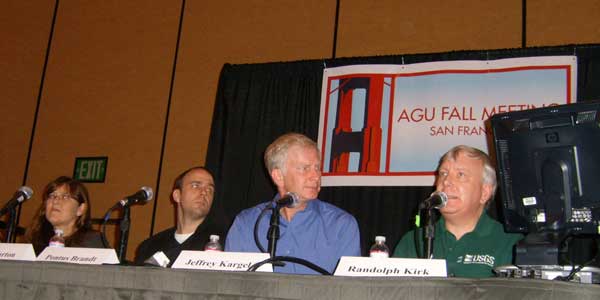 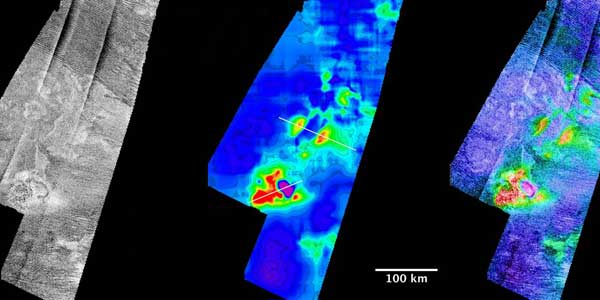 The Cassini RADAR team led by USGS scientist, Randolph Kirk, has discovered the "best candidate yet" for an ice volcano on Saturn's moon Titan. The 3D view reveals multiple mountain peaks, deep pits and finger-like flows at Sotra Facula. Some of the terrain resembles volcanic cones, craters and flows on Earth but made of Titan materials (ice and/or carbon compounds) not molten rock.  Existence of such ice volcanoes on Titan has been controversial, but their presence could solve the mystery of methane gas in Titan's atmosphere. More details and a 3D flyover follow. (December 2010)

New data from NASA's Cassini spacecraft reveal topography on Saturn's moon Titan that makes the best case yet for an ice volcano on Titan and reveals the most Earth-like volcano candidate in the outer solar system. The results were presented today at the American Geophysical Union meeting in San Francisco, during the media briefing "Ice Volcanoes and Hot Plasma Explosions: Highlights from NASA's Cassini Mission to Saturn."

"When we look at our new 3-D map of Sotra Facula on Titan, we are struck by its resemblance to volcanoes like Mt. Etna in Italy, Laki in Iceland and even some small volcanic cones and flows near my hometown of Flagstaff, " said Randolph Kirk, a Cassini radar team member and geophysicist at the U.S. Geological Survey Astrogeology Science Center, Flagstaff, Ariz., who led the stereo-mapping work.

Scientists have been debating for years whether ice volcanoes - also called cryovolcanoes - exist on ice-rich moons, and if they do, what characteristics they have. The working definition assumes some kind of subterranean geological activity that warms the cold environment enough to melt part of the satellite's interior and send slushy ice or other materials out of an opening in the surface.

Some cryovolcanoes bear little resemblance to most terrestrial volcanoes, such as the "tiger stripes" at Saturn's moon Enceladus, where long fissures spray jets of water and icy particles that leave little trace on the surface. At other candidate sites, eruption of denser materials might build up volcanic peaks or finger-like flows, but when such flows were spotted on Titan in the past, some argued they could be explained by non-volcanic processes, such as rivers depositing sediment. But at Sotra, cryovolcanism is the best explanation for the two 1,000-meter-high (3,000-feet-high) peaks, deep volcanic craters and finger-like flows.

"This is the very best evidence, by far, for volcanic topography anywhere so far documented on an icy satellite," said Jeffrey Kargel, a planetary scientist at the University of Arizona, Tucson, who was not involved in the work. "It's possible the mountains are tectonic in origin, but the interpretation of cryovolcano is a much simpler, more consistent explanation."

Kirk and colleagues analyzed new images from Cassini's radar instrument. Kirk's group at the USGS created the topographic map and 3-D flyover of Sotra Facula. Data from Cassini's visual and infrared mapping spectrometer revealed the lobed flows had a composition different from the surrounding surface.