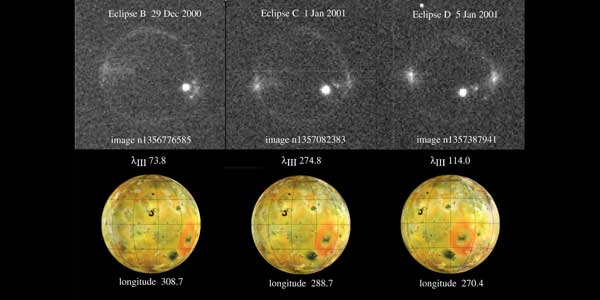 Time-lapse sequence of clear-filter images of Io during the eclipse of January 1, 2001. 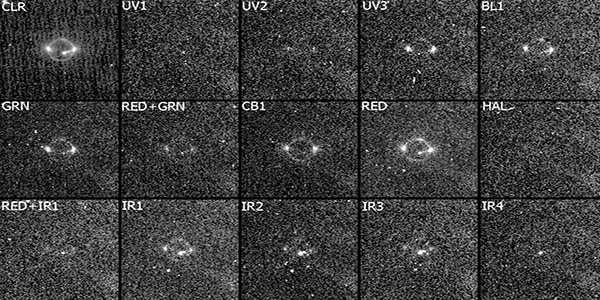 Montage of spectral images from Eclipse D (January 5, 2001). Equatorial glows were detected at wavelengths from at least 330 nm to 880 nm and in all filters except UV1, HAL and IR4.

As the Cassini spacecraft passed through the Jovian system on its way to Saturn, it captured more than 500 images of Jupiter's moon Io in eclipse. Cassini's near-ultraviolet filters detected the moon's bright equatorial glows, supporting the interpretation that the visible emissions are predominantly due to molecular sulfer dioxide (SO2).

Detailed comparisons of laboratory SO2 spectra with the Cassini observations indicate that a mixture of gases contribute to the equatorial emissions:

The locations of the visible emissions vary in response to the changing orientation of the external magnetic field, tracking the tangent points of the Jovian magnetic field lines. Limb glows distinct from the equatorial emissions were observed at visible to near-infrared wavelengths from 500 to 850 nm, indicating that atomic O, Na and K are distributed across Io's surface. Stratification of the atmosphere is demonstrated by differences in the altitudes of emissions at various wavelengths: SO2 emissions are confined to a region close to Io's surface, whereas neutral oxygen emissions are seen at altitudes that reach up to 900 km, or half the radius of the satellite. Pre-egress brightening demonstrates that light scattered into Jupiter's shadow by gases or aerosols in the giant planet's upper atmosphere contaminates images of Io taken within 13 minutes of entry into or emergence from Jupiter's umbra. Although partial atmospheric collapse is suggested by the longer timescale for post-ingress dimming than pre-egress brightening, Io's atmosphere must be substantially supported by volcanism to retain auroral emissions throughout the duration of eclipse.